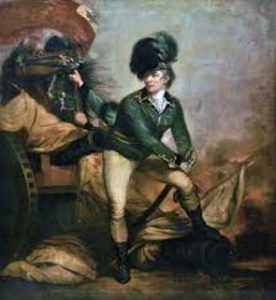 There’s an important principle to remember when considering historical figures: People are complicated. So it helps to avoid, when possible, thinking of anyone as a pure hero, or a complete villain.

That will be the message conveyed by Mike Burgess in a free lecture at noon on Jan. 27 at the South Carolina Confederate Relic Room and Military Museum. The presentation, “Banastre Tarleton: Confronting the Myths and Realities of a Legend,” is part of the museum’s monthly Lunch and Learn program.

Burgess is the lead teacher for the Center for Law and Global Policy Development at River Bluff High School in Lexington. He has a stated philosophy of teaching history, and it begins, “History must be taught fully, fairly, and honestly or else we have a limited understanding of the past, with no way to explain the present, and no hope of building a better future for our children.”

He will apply this principle in his program, presenting a fully, fair and honest assessment of who Tarleton truly was.

The first point Burgess will make to his audience is that they should not use the film “The Patriot” to help them understand the Revolution in South Carolina, where more fighting took place than in any other colony. The presentation of the character thinly disguised as “Col. William Tavington” presents the classic, simplistic Patriot view of Tarleton.

Burgess will explain that the film’s presentation of a sadistic “effeminate psychopath” is far from reality. Some of the facts he will present include:

Of course, he continued the above statement with these words: “…but it is now obvious to all Carolina that treachery, perfidy, and perjury will be punished with instant fire and sword.”

So he was no more an angel than he was a demon. He was a man, and a remarkable one, and understanding him more fully can lead to a better understanding of the war he left his mark upon.

Mike Burgess received his BA in history from the University of South Carolina in 1993 and his Master of Arts in Teaching degree from the same university in 1995. He is married to his college sweetheart, Chrystal, and has four children – Caylee, Jackson, Manning, and Madelyn – all whom attend, or have attended, Lexington County School District One schools.

Founded in 1896, the South Carolina Confederate Relic Room and Military Museum is an accredited museum focusing on South Carolina’s distinguished martial tradition through the Revolutionary War, Mexican War, Civil War, Spanish-American War, World Wars I and II, Vietnam, the War on Terror, and other American conflicts. It serves as the state’s military history museum by collecting, preserving, and exhibiting South Carolina’s military heritage from the colonial era to the present, and by providing superior educational experiences and programming. It recently opened a major new exhibit, “A War With No Front Lines: South Carolina and the Vietnam War, 1965-1973.” The museum is located at 301 Gervais St. in Columbia, sharing the Columbia Mills building with the State Museum. For more information, go to https://crr.sc.gov/.