The Bistro’s Before & During Tale

During this cool strange spring there comes to me a blistering afternoon in 2019 when a train locked down Lake Murray Boulevard. Thunderheads towered over Irmo like Himalayas. Up the boulevard through shimmering fumes a ghostly CSX train blocked Irmo’s main intersection. Westbound drivers, I among them, slowed, crawled, stopped. Just then XM radio aired the U2 B.B. King collaboration … “When love comes to town I’m gonna jump that train.”

I couldn’t jump that train but in mere yards a left turn into Tuscany Village would take me to a white-columned restaurant, the Bistro On The Boulevard, aka the Bistro. I well remember that evening because of the storms that raged. Many of us sheltered that night at the Bistro, a lively place. In normal times people dine, play trivia Tuesday nights, enjoy live music, talk books, sports, yeah, politics too. Thursdays and weekends live music gingers up spirits as bartenders tend and wait staff take orders for the chef. All in all, it’s one of Columbia’s more lively nightspots. 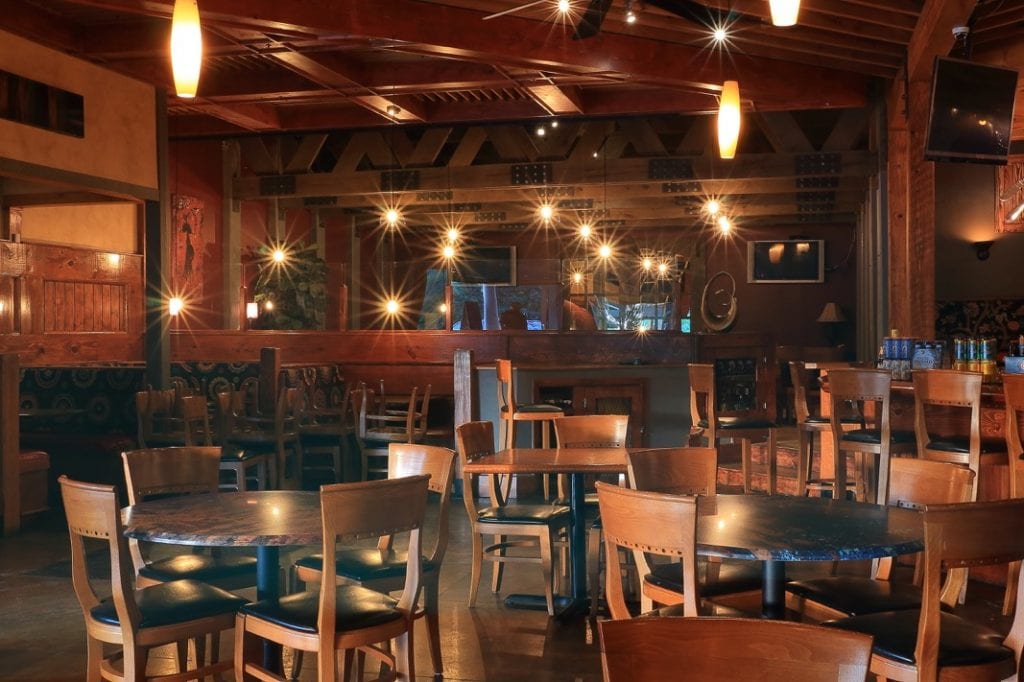 Bistro On The Boulevard

I like the Bistro. It’s my go-to place for socializing. Irwin Shaw, or was it Ernest Hemingway, said a person ought to go to just one bar. “People will know where to find you.” The Bistro’s my place. I like the staff, patrons, and stories. Any writer worth his salt will hang out where people share unbelievable stories. Did you hear about the man who asked his wife to hide a painting he hated? After they divorced, Russia paid her $5 million for this rare Russian painting of country life. I heard that tale of smuggled Russian art at the Bistro where life was good until this Corona Virus Disease 19 locked down life as no train ever could.

Early in March the South Carolina Department of Health and Human Services reported the state’s first two cases of COVID-19. It didn’t take long for normal life to halt. Schools closed, Augusta National suspended The Masters, and the dominoes kept falling until a sort of Twilight Zone set in. On March 17, Governor McMaster issued an executive order that mandated all restaurants cease dine-in services. The Bistro turned to take-out only.

On a breezy Friday evening in April I stopped by to pick up a to-go order. The patio? Empty. Restaurant? Vacated. The bar? Deserted. Staffers Emily, Steve, and Adam were there, judiciously standing apart. As I waited alone, I photographed the social void and through my viewfinder better times came into focus. Evenings when a drum kit flashed gold like a lunar lander … when burnished copper mugs cast a red gleam onto the bar’s fine-grained wood … when hostess Meredith, a striking dark-haired woman, whistled ‘The Andy Griffith Show’ theme perfect pitch. When Adam polished a wine glass as voices brimming with excitement rose higher and higher, a farrago of confabulation to use highfalutin words. Evenings when peals of laughter chimed like musical notes. When people came to enjoy life and add to the soundtrack of clinking glasses and pleasant conversations.

The lockdown quieted all that, ushering in a dark time, but there comes to me memories of the evening after that train lockdown. Wave after wave of storms dragged curtains of rain across Irmo, as neon bolts froze raindrops midair and winds zigzagged tears in white torrents. Lightning exiled night to day in tremendous blue flashes. Women clutching skirts fled the patio as men holding their drinks rushed in, as gusts tossed palmetto fronds around like some hurricane come off the Atlantic. The neon blue bolts of that electric night made you feel forever young and you knew you’d do this as long as you could, but three seasons later an invisible storm struck dividing life into two phases: Before and During.

After? We’re still waiting for that.

Tom Poland’s website is www.tompoland.net
Email Tom about most anything.