The Bistro’s Before & During Tale

I stopped by on another Friday evening. A cloudless evening gave the Bistro On The Boulevard’s columns a soft blue sheen. Behind those columns a singer-guitarist streamed music to patrons via Facebook. Live music was back, kind of. The patio was empty save for the musician’s friends, a couple. People came and went as they picked up orders to go. Well, it beat being closed but it was a band-aid. No socializing.

Said Price, “Once the initial emotion of conquering daily challenges subsided, we missed our guests, our friends. Though we could say hello, how are you, we missed conversations. Empty bar seats and tables weren’t natural. It didn’t feel good. Anyone who truly wants to work in a service industry depends on daily interaction. Taking care of guests is what we do. That was void during this. We stayed in touch with some guests who for various and legitimate reasons could not venture outside. Text messages and phone calls went out frequently to those we could contact.” 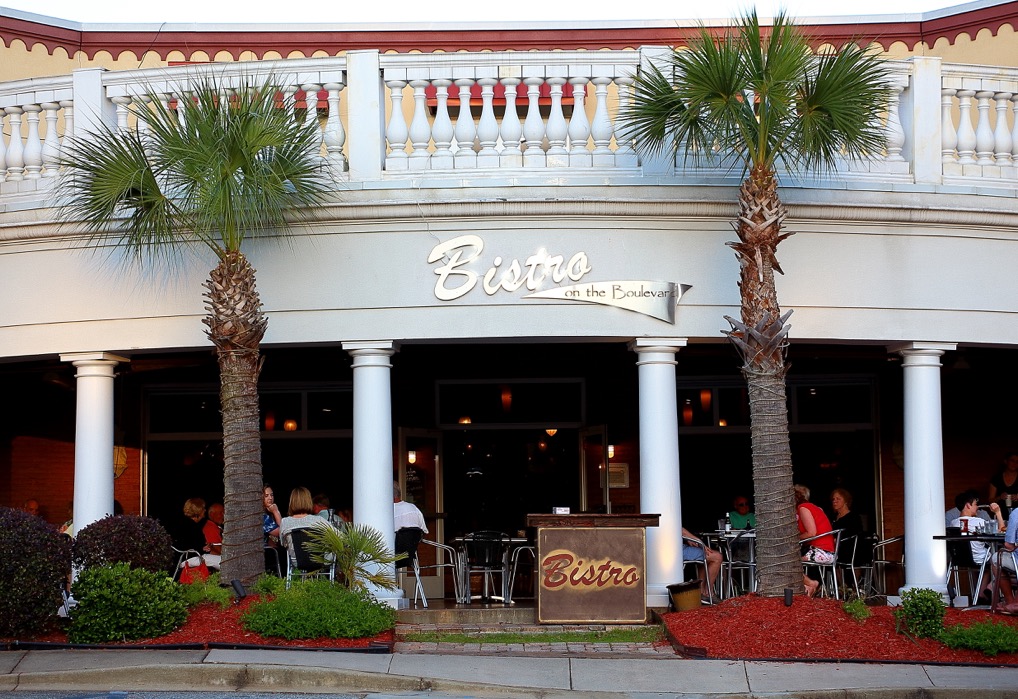 Bistro On The Boulevard

Crosby, Price, and staff worked diligently to observe the decisions made by the “Powers that Be,” as Price phrased it. Most of all, they wanted to be ready for whatever changes came next so they could welcome guests back inside the restaurant. Well, how about outside?

On May 4, Governor McMaster said restaurants could offer outdoor dining. The Bistro’s patio came alive again, but social distancing was in effect. A flicker of life returned but it was a band-aid as well, albeit a bigger one. People could sit in small groups if they came in together. They could talk across widely spaced chairs, and it felt great to resume a bit of what we had been missing: being with great friends and catching up.

On May 11, Governor McMaster said each restaurant could decide if it wanted to let guests dine inside. Tables would have to be spaced six to eight feet apart and no restaurant could exceed 50 percent legal occupancy, but it was not mandatory … just suggested. The Bistro returned to dining in. It marked a number of bar stools and tables as “no sitting” zones and carefully managed the number of patrons coming inside. The good times were back, though the “During Phase” continues. As we say down South, “We’re not out of the woods yet.”

“In looking back, we were truly fortunate to have some amazing people that we call friends, guests, customers in our business,” said Price. “We would not have survived without them. We will always remember and be grateful for helping us through.”

“After,” Phase Three, is out there, getting closer we hope. When it arrives, restaurants like the Bistro can return to 100 percent capacity. So far, the Bistro, one of the region’s better restaurant/bars, is navigating troubled waters that have killed other businesses. And it’s doing so without laying off any employees although it wasn’t all peaches and cream. Some staffers quit as receiving money from the government discouraged them from working. “We lost our head chef, sous-chef, line cook, and several servers,” said Crosby.

Better times wait on Lake Murray Boulevard as they do elsewhere. The sheltering will pass and isolation will give way to socializing as before. The Bistro on the Boulevard has established itself as a place with a cozy atmosphere and live music, and it has stay power, the domain of regulars. New memories of good times will be made. Whether it was Shaw or Hemingway who said it, it’s true. A lot of people know they can find friends at the Bistro, and that’s what will happen. If anything, the sense of camaraderie will be stronger and good times will never be taken for granted again.

Part One: Lockdown Comes To Town

Tom Poland’s website is www.tompoland.net
Email Tom about most anything.