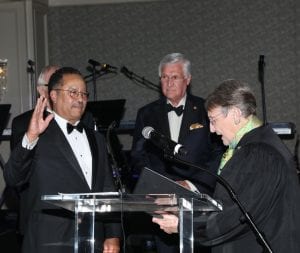 Luther J. Battiste, III, was installed as National President of the American Board of Trial Advocates at the organization’s National Board Meeting at the Hotel Bennett. Mr. Battiste, a founding shareholder of Johnson, Toal & Battiste, P.A., took the oath of office from retired Chief Justice Jean Hoefer Toal of the Supreme Court of South Carolina.

Mr. Battiste is the first African-American to serve as National President. He also made history in 1983 by becoming one of the first two African-Americans elected to Columbia City Council since Reconstruction. He served 15 years as a member of the Columbia City Council, including two terms as Mayor Pro Tempore. In 1998, the City of Columbia dedicated to Luther J. Battiste, III the Monument and Plaza in honor of his dedicated service as a public servant.

Mr. Battiste was admitted to ABOTA in on January 29, 2000, and has served as a National Board Member since 2005. He served two terms as National Treasurer and has served as a chair or member on a number of committees and task forces. In 2011, he served as the President of the Southeastern Chapters of ABOTA, a regional organization representing 11 ABOTA chapters. He is active with the ABOTA Foundation and has long recognized that civics education has been neglected in this country and that failure has resulted in a serious diminution of citizens’ understanding of the key role of an impartial judiciary and the jury system in our constitutional democracy.

Mr. Battiste and his wife, Judy, are spearheading the Foundation’s newest effort launching this year, the Civics Education Literacy Program, which provides free books related to the U.S. Constitution to elementary schools. ABOTA members are financially supporting the program and are serving as volunteers to read to the students.

Mr. Battiste recognized his mentor, the Hon. Matthew J. Perry, Jr., who served as the first African-American United States District Judge in South Carolina.  “Judge Perry demonstrated under difficult circumstances that lawyers who practice with skill, civility, and integrity are respected,” Mr. Battiste said. “We should continue, as an organization, to stress that in an increasingly intemperate world civility and integrity matter. We must continue the efforts of the ABOTA Foundation to communicate the need for civility among lawyers and to educate our youth through civics education.”

As a board member for the National Center for State Courts, Mr. Battiste said that working closely with judges nationwide provided a perspective into the challenges faced by the Third Branch.

“We must continue to support making the judicial system accessible to all and responsive to the changing needs of technology. Advocating for an independent judiciary is essential,” Mr. Battiste said.  “Understanding the past and preparing for the future to protect our valued legal system should be our greatest pursuit.”

Married to Judy M. Battiste, and they have two children, Justin and Jade.

ABOTA is an invitation-only national association of experienced trial lawyers and judges dedicated to the preservation and promotion of the Seventh Amendment to the U.S. Constitution, which guarantees the right to civil jury trials. ABOTA’s primary goal is to educate the American public about the history and value of the right to trial by jury and is dedicated to elevating the standards of skill, integrity, honor and courtesy in the legal profession.

Founded in 1958 with a membership of more than 7,600 experienced attorneys representing both the plaintiff and defense bars in civil cases, ABOTA supports the value of the constitutionally-mandated jury system as the protector of the rights of persons and property. The ABOTA Foundation, the nonprofit educational arm of the organization, was established in 1992 to provide education to the American public about the right to trial by jury and to improve the professional skills of trial attorneys.