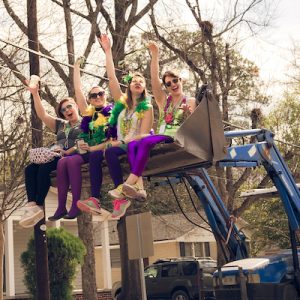 The 10th annual Mardi Gras Columbia Festival and Parade will be held on Saturday, February 22, 2020 at City Roots urban farm in Columbia’s Rosewood neighborhood. Hosted by the festival’s founding organization, the Krewe de Columbi-Ya-Ya, the family-friendly event will kick off with the customary neighborhood Mardi Gras parade at 11:00 a.m., followed by a music festival with more than 20 live bands from 12 p.m. to 6 p.m. Admission for the music festival is $5 for adults and free for kids 12 and under; it is free to participate in the parade. Find festival information and buy advance tickets: http://www.mardigrascolumbia.com.

The festival will feature cold beverages thanks to Louisiana-based Abita Brewing Company, and a variety of cuisines will be available for purchase from several local food trucks and vendors.

The Legendary Mardi Gras Columbia Parade, 11:00 a.m. (parade lineup 10:00 a.m.):
The community is invited to partake in the annual Mardi Gras Parade at 11 a.m., with music, costumes, and of course, bead-throwing. Registration is not required to participate. Lineup begins at 10 a.m. on Airport Blvd at Jim Hamilton Blvd., across from City Roots, and the parade rolls at 11 a.m. The parade typically lasts for just over an hour, and the route is between 2 and 3 miles in length, rolling up Airport Blvd, down Holt Dr., onto S. Woodrow, then along one closed eastbound lane of Rosewood Drive (with police support), then down S. Holly back to Airport Blvd., where it ends at City Roots farm for the festivities.

Leashed, well-behaved dogs are welcome in the parade and at the festival. No dogs are allowed in City Roots’ greenhouses or kitchen facilities.

Costumes are welcomed but are in no way required. Guests are encouraged to come as they are and gather with friends and family to celebrate as a community on the Saturday before the Mardi Gras holiday.

About the Krewe de Columbi-Ya-Ya

The Krewe de Columbi-Ya-Ya is based in Columbia, S.C., and is dedicated to doing charitable work and letting the good times roll since founding the Mardi Gras Columbia festival in 2011. Committed to the Krewe’s benevolent mission, each Krewe member participates in the organization of the Mardi Gras Parade and the Mardi Gras Festival, to bring the community together in a family-friendly atmosphere of unity and celebration. Other Krewe events throughout the year consist of happy hours, barbecues, bacchanals, other local parades, and the annual coronation of the King and Queen of the Krewe de Columbia-Ya-Ya, held near Twelfth Night. “Laissez les” with the Krewe on Instagram: @MardiGrasColumbia; like the Krewe Facebook page: www.facebook.com/KrewedeColumbiYaYa and find the website at http://www.mardigrascolumbia.com.