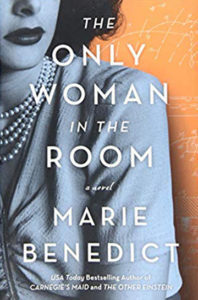 The public is invited to join author Marie Benedict as she discusses her acclaimed new novel The Only Woman in the Room at Converse College on Monday, September 9. The author talk begins at 6:30 p.m. in Daniel Recital Hall (located in Blackman Music Hall), followed by a reception and book signing at 7:30 p.m. in the lobby of Blackman Music Hall. Benedict will talk about all of her books and how they center around a woman who played a pivotal role in history but who has been overlooked. A reception and book-signing will immediately follow.

Benedict’s work of historical fiction explores the remarkable life of Hedy Lamarr. The New York Times raves, “[Benedict is] a novelist who’s made a career writing about ‘the only woman in the room’… In Benedict’s telling, the story is a ready-made thriller as well as a feminist parable.”

All incoming, first-year students at Converse College were assigned The Only Woman in the Room as their common read over the summer. Converse Orientation Leaders will lead students in a conversation at mini-book clubs during the College’s Welcome Weekend, August 22-25. Those same students will explore the theme “Design Your College Experience” in their Student Success Seminar. This yearlong theme asks students to take a personal stake in their own college experience. Instructors will use literary character Hedy Lamarr from The Only Woman In The Room as an example of a person who took life by the horns and made things happen.

Converse College was founded in 1889 by citizens of Spartanburg, S.C. who aimed to create an educational experience that enables women “to see clearly, decide wisely, and act justly.” Today, Converse is a visionary doctoral university pushing beyond traditional boundaries to make a quality educational experience available to every student who seeks it. Converse College’s mission is to help students develop their unique voice, a sense of value, and a vision for the future. For more information, visit www.converse.edu.