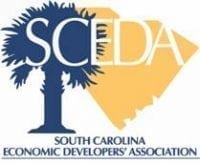 The L&C Railroad exec was integral in bringing E.&J. Gallo to Chester County

The South Carolina Economic Developers’ Association (SCEDA) awarded Matt Gedney, of the Lancaster & Chester Railroad (L&C) and parent company Gulf & Ohio its Ally of the Year award during the 2022 SCEDA Annual Conference, held May 4-6 at the Sonesta Resort in Hilton Head.

Gedney has been an active member of SCEDA since 2006. Gedney, the short-line railroad’s Chief Business Development Officer, has been with the company since he graduated from the University of South Carolina in 2004. His late father, Steve Gedney, is a former president of the L&C, which has 62 miles of rail serving industries and transloading facilities in Chester and Lancaster counties.

The Ally of the Year award is presented to a member of SCEDA who has made an impact on the community and possesses qualities of leadership, enthusiasm and motivation.

Robert Long, director of Chester Economic Development says that Gedney embodies what the Ally of the Year award is about. Long says that Gedney’s input and actions were integral in global wine and spirits company, E.&J. Gallo Winery’s decision to choose Chester County as the location of its new state-of-art production facility and distribution center.  The $423 million investment is expected to create 496 jobs.

“Gallo is a family owned and operated company and Matt’s own experience and company culture quickly assured the California executives that these were people they could work with and people who understood how the community and company could work together,” Long said.

“Matt’s ability to quietly bring stakeholders together in a way that addresses their needs to the mutual advantage of everyone who lives and works in these communities makes him a huge asset to our county and beyond,” Long said.