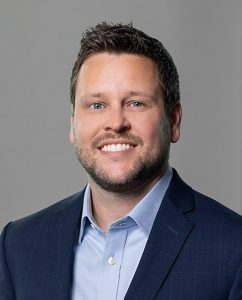 “Brad’s commitment to the company along with his creativity have been welcomed assets to the organization”, said McCrory President Allen Bridgers. “He thrives on supporting our team and has built trusting relationships both within our walls as well as among his industry peers.”

A 2020 graduate of Leadership Columbia, Davis is also a member of the South Carolina Economic Developers Association, the Southern Economic Development Council and serves on the Midlands Executive Committee for the Urban Land Institute of SC. He and his wife, Erin, along with their son, live in Columbia, SC.

McCrory Construction, headquartered in Columbia, South Carolina, with an office in Greenville, South Carolina is a full-service general contractor that has operated continuously since 1918. Licensed in 13 states throughout the Southeast, McCrory has served an array of private and public sector clients through more than 3,000 general construction, design-build and construction management projects. Now under fifth generation private ownership, McCrory continues to be a leading force in retail, industrial, commercial, healthcare and multi-family construction in the Southeast. To learn more, visit mccroryconstruction.com.