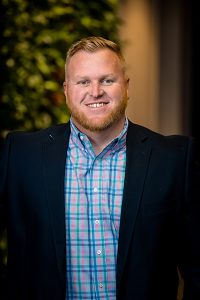 McCrory Construction’s Stephen Cooper, Senior Project Manager based in the firm’s Greenville office, has been recognized as one of Greenville Business Magazine’s 2020 Best & Brightest 35 and Under – an elite group of young professionals who are making a difference in their workplace and community. Cooper has the distinction of being the only construction operations executive in this year’s “Best & Brightest” class.

McCrory, which recently celebrated its 102nd anniversary, is the oldest general contractor in South Carolina. The values around which McCrory operates include commitment to its people, always doing the right thing, focusing on solutions, and continuous improvement in all areas of the business.

“At just 33 years old, and one of McCrory’s youngest senior project managers, Stephen has achieved a level of competence beyond what one would expect at this stage in his career. Much of this can be attributed to his day-to-day responsibility for the building side of the GSP Airport renovation while he was still in his 20s. He probably gained 10 years of management training in three years. But what stands out most about Stephen is his work ethic and personal integrity. He always gives 110 percent and you can always trust he will do the right thing,” said Don Warren, FDBIA, Executive Vice President in charge of McCrory’s Upstate operation.

Cooper is a 2011 Graduate of Clemson University with a Bachelor of Science Degree in Construction Science and Management (CSM) and a Business Minor. He is a member of the Design-Build Institute of America (DBIA), a well-established, highly respected industry association. He is currently studying for the rigorous exam required to become a DBIA Certified Professional, a prestigious industry credential.

Cooper typically volunteers his time at Rudolph Gordon Elementary School throughout the year, including during Community Helper Week when kids learn about how different occupations serve the community. He is also a Little League coach in Simpsonville.

McCrory Construction, headquartered in Columbia, South Carolina, with an additional office in Greenville (S.C.), is a full-service general contractor that has operated continuously since 1918. Licensed in 13 states throughout the Southeast, McCrory has served an array of private and public sector clients through more than 3,000 general construction, design-build and construction management projects. Now under fourth generation private ownership, McCrory continues to be a leading force in retail, commercial, healthcare, multi-family and industrial construction in the Southeast. To learn more, visit mccroryconstruction.com.