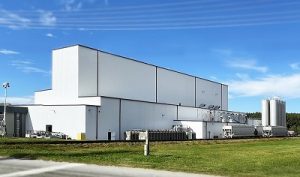 McCrory Construction recently completed the construction phase for an $80 million manufacturing facility in Anderson, South Carolina, for Pregis’ Performance Flexible operations. The company is a leading manufacturer of high-quality blown films serving various industries including food and medical as well as a supplier of protective packaging solutions.

Leveraging the design-build delivery method, McCrory’s industrial team executed the project on an accelerated schedule – from concept to completion in less than 10 months. McCrory and its design-build team members joined Pregis executives and employees, along with state and local dignitaries, for a formal ribbon-cutting ceremony last month to celebrate production start-up.

“This project exemplifies the beauty of design-build, whereby design and construction services are integrated at the initial conceptual stage of a facility,” said Don Warren, McCrory Executive Vice President. “Going from ‘a sketch’ to groundbreaking in just three months is an extraordinary accomplishment for a project of this size. To then move through construction in under eight months is something that could only happen when operating as one cohesive team throughout the entire design and construction process.”

The project required a combination of demolition, renovation and new construction to repurpose an existing site for Pregis’ use. McCrory’s team demolished a single-story facility with a 30,000-square-foot print, then added five stories of vertical construction in the same footprint. The resulting 102,000-square-foot production area is the most technologically advanced extrusion facility in North America, according to Pregis. In addition, McCrory renovated two stories of associated office space – bringing the total project size to 168,000 square feet of renovated and new construction space.

The majority of Pregis’ new facility is dedicated to manufacturing, with multiple energy-efficient lines producing engineered films that are used downstream to manufacture performance-oriented, flexible packaging solutions for food, CPG, healthcare/medical and industrial applications. The facility includes a world-class film laboratory for developing and testing materials, as well as office, warehouse and distribution space. The facility was designed to accommodate a future silo pad.

Utilizing McCrory’s in-house Building Information Modeling (BIM) capabilities, McCrory and its key design-build team members worked with the owner’s equipment vendors through BIM to fully coordinate the facility just ahead of process equipment installation, saving the project time and money by eliminating clashes and the need for rework in the field.

From a construction standpoint, McCrory’s team had to overcome the challenges associated with working on a tight site constrained by rail lines on one side and an existing building on the other. With only one way onto the site and one way out, meticulous planning and coordination was critical.

“Throughout design and construction, our commitment to creating a high-functioning, collaborative team was central to the success of the project on all levels. We delivered the project safely, on time – according to an aggressive schedule, and within budget,” said Sam Dixon, McCrory Senior Project Manager.

Dixon went on to say, “Fortunately, we were able to make our steel purchase commitment right before supply chain became a major issue. SteelFab delivered 780 tons of steel to the project starting in April 2021. Metrolina Steel Erectors kept the project on track, with their installers completing their work three weeks ahead of schedule, which allowed all the other major trades to stay on schedule. With full support from the entire design-build team, Pregis was able to start production according to the company’s originally stated goals and timelines.”

McCrory Construction, headquartered in Columbia, South Carolina, with an office in Greenville, South Carolina is a full- service general contractor that has operated continuously since 1918. Licensed in 13 states throughout the Southeast, McCrory has served an array of private and public sector clients through more than 3,000 general construction, design-build and construction management projects. Now under fifth generation private ownership, McCrory continues to be a leading force in retail, industrial, commercial, healthcare and multi-family construction in the Southeast. To learn more, visit mccroryconstruction.com.