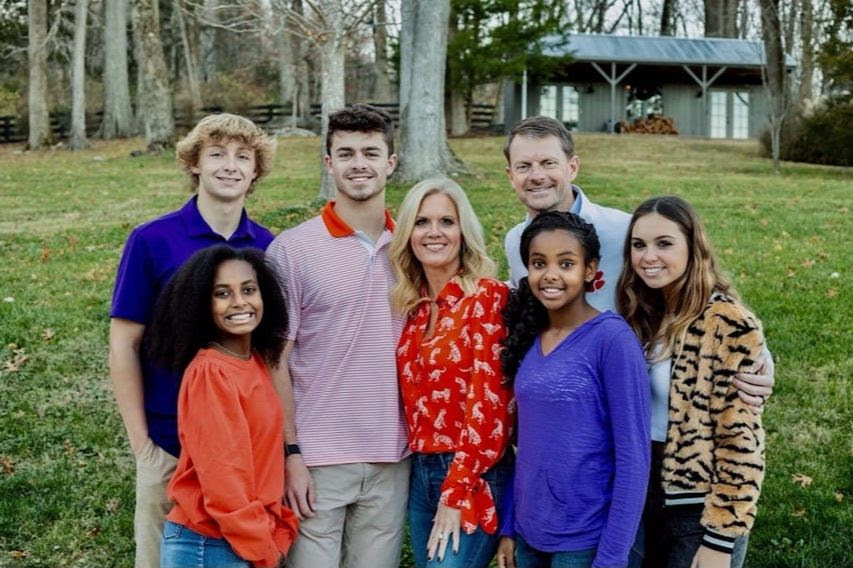 With a strong sense of dedication and commitment to the future of athletics at Clemson University, Stuart McWhorter ’91 and Leigh Anne Hendrix McWhorter, of Nashville, Tenn., have pledged a Cornerstone Partner Gift of $2.5 million to IPTAY and Clemson Athletics. The gift supports the softball program, and in recognition of their outstanding generosity, the softball stadium will be named in their honor.

“We are so grateful to Stuart, Leigh Anne and their entire family for their generous commitment to Clemson Athletics and the softball program,” said President Jim Clements. “We are excited about the direction of the program and are thankful to the McWhorters for becoming Cornerstone Partners and being such a significant part of the foundation of softball at Clemson.”

After years of planning, the softball program played its inaugural season in 2020, joining Clemson’s elite sports programs. This impactful gift from the McWhorter family ensures Clemson’s softball program will maintain its strong momentum with a level of success that matches the University’s other winning programs and competitors in the Atlantic Coast Conference.

“My father taught me the meaning of giving back and paying it forward at an early age. As a result of my experience as a student and today as an alumnus, I want to meaningfully continue my support. Leigh Anne and I are thrilled to support Clemson and in particular, Clemson softball,” says Stuart McWhorter.

Leigh Anne McWhorter adds, “This is the opportunity to give these young women the chance to participate in the sport and grow from lessons they learn far beyond the field of play. We have three daughters, and my hope is that they too will have the same opportunities, whether that’s through sports or other life experiences.”

In its first season, the softball program averaged 1,544 fans per game, ranking first in the ACC and fifth nationally. The Tigers finished 19-8 and 5-1 in ACC play in the abbreviated 2020 season.

Stuart was the official Clemson Tiger mascot while a student from 1987 to 1990. This, along with a passion and strong desire to give back, inspired Stuart and Leigh Anne to previously support the Tiger Pride Campaign by funding the bronze Tiger located at Gate 1 of Memorial Stadium.

They have also given generously throughout the years to initiatives across IPTAY and academics, including making the first pledge in support of the Entrepreneurial Leadership Enhancement Fund.

Stuart and Leigh Anne are distinguished members of Clemson’s Cumulative Giving Society and the President’s Leadership Circle. Stuart was a founding member of the Leadership Committee for Clemson University’s 10-year capital campaign, The Will to Lead, and he served on the Athletics Tiger Pride Capital Campaign Cabinet.

Stuart was previously a member of the Clemson University Foundation Board, and he and Leigh Anne are members of the Founder Society for the Arthur M. Spiro Institute for Entrepreneurial Leadership.

Stuart received a Bachelor of Science in management from Clemson and a master’s in health administration from The University of Alabama-Birmingham. Stuart and Leigh Anne live in Nashville, Tenn. with their five children:Clayton, a freshman at Clemson, Thomas, Caroline, Marleigh and Layla.

Stuart, a 1991 Clemson graduate with an entrepreneurial spirit, is the co-founder and chairman at Clayton Associates, a venture investment firm, with more than 25 years of experience in entrepreneurship and early-stage investing. He recently served as the commissioner for the Department of Finance and Administration under Tennessee Governor Bill Lee and then as director of Tennessee’s COVID-19 Unified Command Group before returning to Clayton Associates in 2021.

Stuart currently serves as the Chairman of the Board of Directors of Nashville-based, FirstBank Financial Corporation (NYSE:FBK). He also serves as a partner of Outsider.com and Spiny.ai, two digital media and publishing companies in Nashville, Tenn. and London.

Leigh Anne pursued a Bachelor of Science in human learning and behavior from The University of Tennessee, Knoxville in 1993 and then worked for several pharmaceutical manufacturing companies in sales, including GlaxoSmithKline. Leigh Anne is the mother of five and active in the Nashville non-profit community, devoting her time particularly to child welfare and adoption.

The McWhorter family continues to demonstrate a deep commitment to Clemson by giving generously of their time, talent and treasure. Clemson’s softball program is preparing for its second season, and thanks to the extraordinary generosity of Stuart and Leigh Anne, McWhorter Stadium will provide Clemson softball with the strong foundation to become an elite Clemson program.

With this gift, the McWhorter family becomes the 18th member of the Cornerstone Partner program in Athletics, joining those who have pledged a minimum of $2.5 million to propel Clemson forward in the University’s quest to educate and prepare student-athletes who will compete and win at the highest levels.