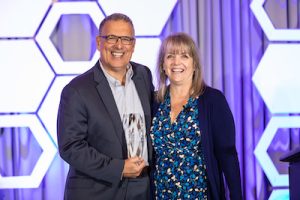 The Power Transmission Distributors Association (PTDA) has named Michael Cinquemani of Greenville, S.C., the thirty-first recipient of its Warren Pike Award for lifetime achievement in the power transmission/motion control (PT/MC) industry. He received the accolade October 28 during the PTDA 2022 Industry Summit in Nashville.

Established in 1984, the Warren Pike Award honors individuals who have demonstrated outstanding, continuous, long-term support of PTDA and the PT/MC industry and is only presented when an individual’s achievements merit this prestigious recognition. Warren Pike Award recipients are selected by the PTDA Board of Directors.

Cinquemani’s dedication to the industry began early in his career with Rockwell Automation. The 2007 sale of the company to Baldor Electric Company gave him the opportunity to demonstrate his acumen in leading people and building relationships. In 2010, Cinquemani bought Master Power Transmission, where he inspires and motivates his team on a daily basis.

Cinquemani began attending the PTDA Industry Summit in 2004 and was quickly tapped as a volunteer on the Membership Committee. From there, he served on more than nine committees and task forces, including chairing the Manufacturer Council and serving on the PTDA Board of Directors for multiple terms. With a passion for giving back and building the next generation workforce, Cinquemani facilitated a full-day workshop at the Leadership Development Conference in 2016.

In his acceptance speech, he shared, “Working with friends makes for trusting relationships which elevate our performance. This makes us more effective in our jobs. I am thankful to have had the opportunity to work in this industry with my friends.”