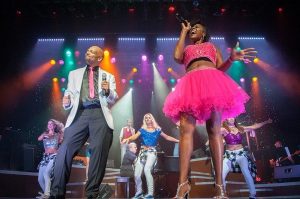 Moranz Entertainment is bringing the biggest hits of the ‘60s, ‘70s and ‘80s to the Charleston Music Hall for its summertime show, ”American Jukebox.”

Featuring some of the country’s most talented singers, dancers and musicians, no musical genre is off limits in this high-energy show. Showtimes are 3 p.m. and 8 p.m. on Saturday, July 9 at the Charleston Music Hall, 37 John St. in Charleston.

Audiences will be treated to a wide range of hits – everything from “Crazy Little Thing Called Love” by Queen and “Sweet Caroline” by Neil Diamond to “I Feel the Earth Move” by Carole King and “Ain’t No Mountain High Enough” by Marvin Gaye and Tammi Terrell.

“There are so many sing-along-able songs from these decades,” said Brad Moranz. “From one song to the next, you can’t help but sing along.”

New to a Moranz Entertainment production is 12-year-old tap dancer Silas Moody-Laird, a student at Palmetto Scholars Academy. He’ll be doing a tap challenge with Brad Moranz, who has been his tap teacher for several years in Mount Pleasant. “He’s a prodigy and that’s not a word I throw around or use lightly,” Moranz said. “He’s an insanely gifted tap dancer. His feet go 90 miles per hour.”

Other show highlights include Jenna Flaherty’s performance of “Somewhere” from “West Side Story” and the hit “Make Me Feel My Love,” written by Bob Dylan and covered by Billy Joel, Garth Brooks and Adele.

Tiffany Parker will sing the Dolly Parton hit, “9 to 5.” And Michael Minor will amaze audiences with his ventriloquism as he performs “Grazing in the Grass” with his hippie puppet Screech. He also will sing “Impossible Dream” from the Broadway musical “Man of La Mancha.”

Audience members will be treated to a show first: three piano players all playing one piano for a virtuosic “Boogie Woogie Trio.”

Of course no Moranz Entertainment show is complete with comedy sketches of Brad and Jennifer Moranz.

Tickets are $42 for adults; $39 for seniors/military; $24 for students; and $21 for children 12 and under (plus ticketing fees). Purchase tickets via bradandjennifermoranz.com or in person at the Charleston Music Hall Box office Thursday through Saturday from 10 a.m. to 3 p.m., and by phone 843-416-8453.