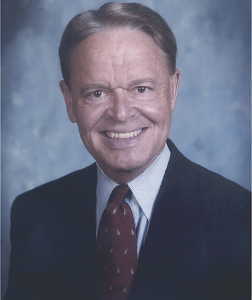 Dr. Hudgins was MTC’s third president, serving from 1986-1999, and was the longest-serving president in the college’s history. The honor was bestowed during a board meeting this morning.

“We are delighted to honor Dr. Hudgins in this way,” said Commission Chair Margaret U. Holmes. “He was, and is, a great champion not only for Midlands Technical College but also technical colleges and students across the state and country.”

Following his work at MTC, Hudgins became the Executive Director and later the President of South Carolina’s Technical College System. He was a national pioneer of two-year college institutional effectiveness, strategic planning and marketing, and he created the Vision for Excellence that set the tone for MTC’s future growth and emphasis on student success.

During Hudgins’ tenure at MTC, he expanded enrollment as well as physical and technological infrastructure. By his second fall semester as president, credit enrollment increased by 17%. He oversaw the addition of the Airport Campus’s Academic Center in 1989 and worked with the Midlands Technical College Commission to purchase the 150-acre Northeast Campus. Also, during his time as MTC President, the college transitioned from the quarter system to semesters and computerized all aspects of its operations through an expansive information technology plan.

Dr. Hudgins was well-known on campus for his office visits and hand-written personal notes of congratulations and good wishes. He and his wife Juanita have two adult children and a large extended family.