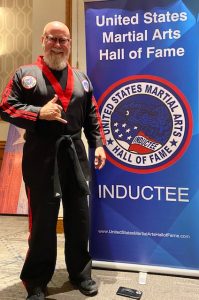 Dr. Tom Mullikin, chairman of the S.C. Floodwater Commission and a member of the S.C. Black Belt Hall of Fame (SCBBHOF), earned high martial arts laurels when he was promoted to 9th-degree black belt by the High Dan Board, TEXAS MARTIAL ARTS, last week. The ranking, officially dated Oct. 1, was conferred Oct. 6 during ceremonies at the National Sport Karate Museum in Houston, Texas.

“A highly credible martial artist, Tom uses martial arts in everything he does, literally in all facets of his life,” says Bruce Brutschy, a 10th-degree black belt and an inductee in and director of the SCBBHOF. “Tom also supports the local, regional, and national martial arts communities in such a way that it is no wonder he is being recognized and honored this way.”

Like Kurban, Mullikin has trained American soldiers as a U.S. Army combatives instructor while serving as an Army JAG officer and U.S. Army Master Fitness Trainer.

Mullikin was inducted into the SCBBHOF in 2019.

“Tom was an easy choice for us three years ago,” says Col. Steve Vitali, U.S. Marine Corps (Ret.), a 2017 SCBBHOF inductee whose older brother Keith – also an SCBBHOF member – was ranked one of the world’s top ranked fighters of all time. “There are a lot of truly great fighters in South Carolina, but only a select few have thus far met the exacting standards of the Hall of Fame. Tom Mullikin is one of those select few.”

A Camden-based attorney, global expedition leader, university professor, former Army officer, retired two-star commanding general of the S.C. State Guard, and today chairman of the gubernatorially established S.C. Floodwater Commission, Mullikin has been a student of martial arts for 40-plus years; having studied and practiced under martial arts masters throughout Asia and across North America. He later founded the Mullikin Martial Arts Studio in Camden, and was the subject of a 2017 profile feature in BLACK BELT magazine, the world’s leading martial arts publication.

According to BLACK BELT, Mullikin is “a fighter indeed” and “an accomplished martial artist of several disciplines who holds a black belt in traditional karate,” adding, “His [Mullikin’s] smile, his fortitude, and yes, his sheer grit, all came from the discipline he learned as a young man – and has embraced his entire life – as a martial artist.”

Mullikin has not only applied his martial arts training and skills into traditional sport karate and instructing others in martial arts, but the techniques he has learned and fine-tuned through the discipline of martial arts conditioning have carried over into his mountain climbing and SCUBA training wherein he certifies SCUBA-diving students as “Ninja Divers” with a creative focus on traditional martial arts breathing practices.

Mullikin was named to the United States Martial Arts Hall of Fame as a “distinguished master” earlier this year.