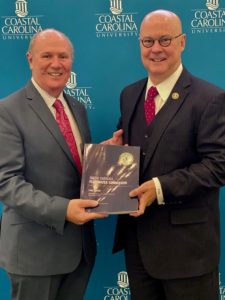 Less than a week before global expedition leader Tom Mullikin begins the first leg of his month-long 500-mile trek across South Carolina, the chairman of the S.C. Floodwater Commission received two Senate Resolutions: One for his forthcoming South Carolina Seven (SC7) expedition. The other for Mullikin himself commending his career and life’s work overall. Both Resolutions were introduced and adopted on the floor of the Senate at the S.C. State House, Tuesday, June 23.

Sponsored by Sen. Thomas Alexander, a portion of the first bill reads: “To commend and honor the S.C. Floodwater Commission and its partners for establishing the SC7 expedition and for facilitating its exploration of the seven wonders of South Carolina and its support and protection of the state’s beautiful environment.”

A portion of the second bill reads: “To commend and honor Major General Thomas Stowe ‘Tom’ Mullikin, retired commanding general of the S.C. State Guard and current chairman of the S.C. Floodwater Commission, for his leadership in the forthcoming SC7 expedition and for his visionary work; sacrifices of time, energy, and resources; exemplary leadership and overall example for which the state of South Carolina, the nation, and the world are all beneficiaries.”

Next Wed., July 1, Mullikin and his hand-picked team will embark on his SC7 expedition, a first-of-its-kind mission that will have participants hiking the length-and-breadth of the Palmetto State from the mountains to the sea.

So-named for the seven geographic wonders unique to S.C., Mullikin’s route will include each segment of the Palmetto Trail from the Blue Ridge Mountains in the Upstate to the
Ashepoo, Combahee and Edisto Basin (aka ACE Basin) in the Lowcountry. The SC7 expedition will be both literal (for those physically participating) and virtual (for those in nursing and assisted-living facilities statewide who will be able to participate virtually). This virtual participation will be accomplished through Facebook LIVE each day during the expedition.

Experts along the route will lead discussions ranging from conservation, resiliency, adult and childhood fitness, outdoor therapy, floodwater-mitigation issues, and more. The discussions during trailside fireside chats by will be led by key partners in the outdoor and conservation industries. Expedition partners so far include the S.C. Department of Natural Resources; the S.C. Floodwater Commission; the S.C. Dept. of Parks, Recreation, and Tourism; the Association of the U.S. Army’s Palmetto State Chapter; the South Carolina National Heritage Corridor; Yamaha Rightwater; the Palmetto Conservation Foundation; the Cape Romain Natural Wildlife Refuge; the Nature Conservancy; the Edgar Dyer Institute for Leadership and Public Policy – Coastal Carolina University, and many others.

In addition to his leadership of the S.C. Floodwater Commission and former command of the S.C. State Guard, Mullikin is an energy-environmental attorney, a university professor, and a former U.S. Army officer. He has spent much of the last four decades traversing, navigating, and climbing mountains on every continent on earth (including reaching the summits of more than 20 mountains across the globe) and he has logged SCUBA dives in all the world’s oceans, including ice dives in the Arctic and Antarctic Oceans.

– Pictured (L-R) are Alexander and Mullikin with a copy of the S.C. Floodwater Commission’s official 2019 report for the Governor.