The Rev. Rob Dewey and his wife, Kathy, recently announced their intention to provide funding to create a center for chaplaincy at Charleston Southern University. The more than $2 million commitment will establish the Dewey Center for Chaplaincy, which represents one of the largest philanthropic commitments in the history of CSU. The Deweys have begun providing annual gifts to resource the center and included CSU as the beneficiary of their estate.

“The extraordinary generosity of Rob and Kathy Dewey to establish this chaplaincy center will extend their legacy of ministry for generations. I am not exaggerating when I say that Chaplain Dewey’s hands-on service in the trenches the last couple of decades put chaplain ministry on the map in this region and beyond. How fitting that his name would grace a center to commission a legion of chaplains who will follow in his steps,” said CSU President Dondi Costin.

Rob, a retired Episcopal priest and the founder of Coastal Crisis Chaplaincy, and Kathy, a retired school psychologist, consider it the next step after spending their careers caring for others. Rob said, “Kathy and I do not want to leave the money we have been blessed with up to the probate judge to decide where it goes. We don’t have children and grandchildren, so we have adopted CSU.” 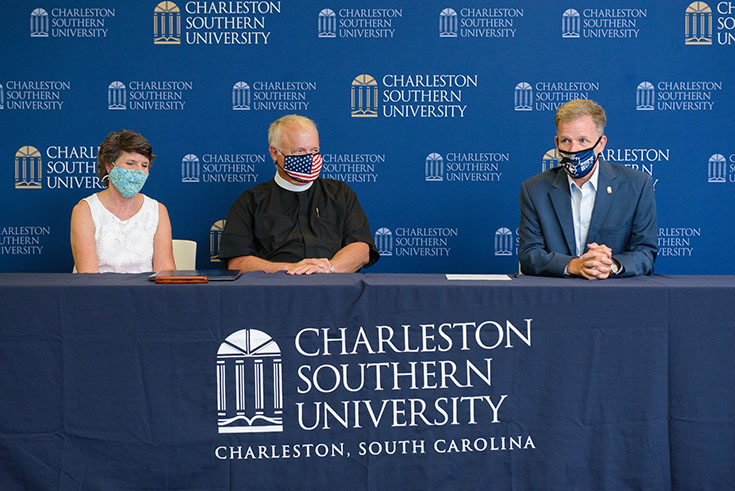 The Deweys and CSU President Dondi Costin announced the Deweys’ commitment with a formal signing ceremony on campus Monday, July 13, 2020. The multi-million dollar gift is one of the largest philanthropic commitments in the history of Charleston Southern University.

The Deweys feel CSU has the same ministry mindset they have. Rob said he has watched CSU for many years. He said, “I thought of other locations locally and nationally, but I know the money will be used and the vision will go further than I ever intended [at CSU]; it is the right time and right place.”

Kathy said, “We’ve been talking about it for a long time. Rob always had a vision to encourage people to get out on the street, not necessarily stay in the four walls of the church.”

In the 1970s Rob served as a police officer in the Black Mountain, N.C., area and spent a year on staff with the Billy Graham Evangelistic Association before attending the University of the South and Trinity Episcopal Seminary. It was while he was serving an assistantship on John’s Island and doing ride-alongs with police officers that he first recognized the need for a chaplain program to address the stress, PTSD and high suicide rate among first responders.

Rob saw the benefit of combining the theological and the practical in ministering to people. He worked with local law enforcement officials, and the result was the birth of the Coastal Crisis Chaplaincy, a ministry for all first responders and victims’ families.

In addition, Rob was a chaplain for the FBI for 24 years, elected as lead chaplain in 2015, was a chaplain for organizations such as SLED and the Lowcountry Hospitality Association, was trained in hostage negotiations, aviation incidence response, and worked with the University of Maryland to form programs in their Pastoral Crisis Intervention. He was named Innovator of the Year in Crisis Response by World Congress on Traumatic Stress in 2016.

Rob said he was flying by the seat of his pants, learning as he went. The years leading up to 2015 and the devastating events of that year, which included the murders of nine members of Emanuel AME Church in downtown Charleston and a 1,000-year flood that ravaged the state, led to Rob’s own experience with PTSD and the need for a breather. He retired and rested. He started the Lowcountry Community Chaplaincy in 2017 because he didn’t want to sit at home, and he and Kathy started planning for the future.

Rob said being a chaplain is an opportunity to help people, and not hurt people, in the midst of a crisis. He said, “We are becoming a non-Christian, nonreligious society; the need for more chaplains is going to grow.”

Dr. Ben Phillips, dean of the College of Christian Studies, said, “This new center will develop academic programs to train chaplains for any of the over 60 forms of chaplaincy identified by the North American Mission Board. The center will also develop noncredit, certificate courses to train volunteer chaplains in first responder, corporate, and community chaplaincy, as well as conferences to support professional chaplains serving in the Lowcountry.”

The Dewey Center for Chaplaincy is already underway. Recently hired as director of the center, Dr. Ron Harvell will begin August 1, 2020, to kick off this new program. Harvell is the current deputy chief of chaplains with the United States Air Force at the Pentagon, and climbed the ranks to brigadier general in his 20-plus years in the military. He holds a doctor of ministry from the Asia Graduate School of Theology and Southwestern Baptist Theological Seminary.

The Deweys are eager to see the center begin soon. “It is fun for us to be able to see where the inheritance that we received is going to be used for the glory of God.”

Founded in 1964, Charleston Southern University is a private, Christian liberal arts university. With an enrollment of 3,459 students, CSU is one of South Carolina’s largest accredited, independent universities and has been recognized as one of America’s Best Christian Colleges, America’s 100 Best College Buys, U.S. News & World Report’s Best Online Bachelor’s Programs (#11 nationally in 2020), U.S. News & World Report’s Best Online Bachelor’s Programs for Veterans (#8 nationally in 2020), Colleges of Distinction, VA Yellow Ribbon Program and a Military Friendly School. Accredited by the Southern Association of Colleges and Schools Commission on Colleges, CSU offers bachelor’s, master’s and doctoral degrees. Students can learn online or in the classroom. The university’s vision is to be a Christian university nationally recognized for integrating faith in learning, leading and serving.