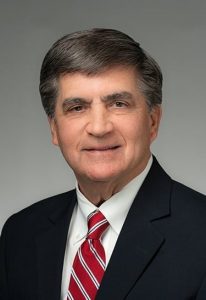 The new executive director of the Municipal Association of South Carolina is Wayne George, a former mayor, city council member and state legislator. The Association represents the state’s 271 cities and towns, providing training, advocacy at the state and federal levels, and programs that give local officials the tools they need to provide quality services.

There’s something unique about serving in local government, says George. Working to improve quality of life at the city and town level is just different because you can quickly see the positive results.

But, of course, it’s not easy making decisions that affect the lives of your next-door neighbors and the people you see at church, the grocery store and your children’s school.

Local governments, George said, “are sometimes not completely understood by the general public. But we are the government that’s closest to the people.”

George succeeds Miriam Hair who retired in December after 32 years with the Association, the last nine as executive director.

“Wayne’s background in local government, experience at the State House, organizational experience as a successful business owner, and years of involvement with the Municipal Association on staff and on the board made him the ideal candidate for executive director,” said Cayce Mayor Elise Partin who chairs the Association’s board. “His dedication to the strength of local government, which increases the strength of our state, will continue the positive difference the Association makes.”

Before joining the Association, George had a career in insurance after founding his own company. He also worked in the Municipal Association’s Risk Management Services division and as a field service representative for the Association from 2004 to 2010. Later, George represented parts of Dillon, Horry and Marion counties in the S.C. House of Representatives for two terms after his election in 2012.

George is particularly attuned to the challenges that rural cities and towns in South Carolina face. In 2004, then-Gov. Mark Sanford named him Rural Innovator of the Year for his idea of to locate the Florence-Darlington Technical College satellite campus to downtown Mullins, his downtown revitalization efforts, and his support for the preservation of historic properties, according to media coverage.

George says he’s particularly looking forward to getting reacquainted with the many municipal officials he has known for years and meeting the new ones.

He’ll be busy. The November elections brought substantial changes in city halls across the state.

In the Berkeley-Charleston-Dorchester , Lowcountry, Lower Savannah, Waccamaw, Santee Lynches and Pee Dee councils of government, 86 cities and towns had general elections, resulting in a turnover rate of 31 percent for council seats and 33 percent for mayoral seats — 18 percent of councilmembers and 25 percent of mayors did not seek re-election.

But getting to know the hundreds of new and veteran public officials alike — from city halls to the S.C. State House — and across other statewide organizations is likely to be a pleasure for George, who says he has always worked well with residents from diverse groups. He recalled the best advice he’s ever received about working with others, words from his parents.