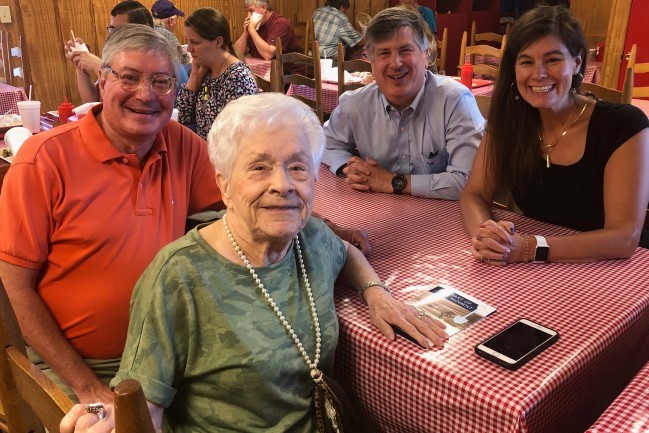 Barbara Harter Rippy and her financial advisor M. Larry Craine meet with Philip Hall, dean of the MUSC College of Pharmacy, and Megan Draper, the college’s director of development, to discuss the Bobby Gene ’63 and Barbara Harter Rippy Lecture Hall.

A lecture hall in the college’s new pharmacy facility will be named the Bobby Gene ‘63 and Barbara Harter Rippy Lecture Hall.

Noted Union, South Carolina, philanthropist Barbara Harter Rippy has made a $1 million commitment to the College of Pharmacy at the Medical University of South Carolina (MUSC). The donation will support the mission and vision of the college.

In recognition of this major gift, the college is naming the lecture hall in its new pharmacy facility the Bobby Gene ‘63 and Barbara Harter Rippy Lecture Hall. A virtual groundbreaking for the new facility was held in April.

“The Rippys exemplify the best characteristics of independent community pharmacy ownership,” said Philip Hall, Pharm.D., dean of the MUSC College of Pharmacy. “Trusted caregivers, community leaders, dedicated to customers, good businesspeople and great models for our students. We’re delighted the Rippy name will have such a prominent place at MUSC.”

For 34 years, the Rippys owned and operated Smith Drug Store on Main Street in Union. In 1959, Bobby Rippy enrolled at the MUSC College of Pharmacy while Barbara Rippy continued to work, supporting the family until her husband earned a pharmacy degree that would eventually enable them to buy Smith Drug Store in 1969.

The Rippys became community leaders and benefactors, supporting civic and church organizations as well as sponsoring a Dixie Youth baseball team for 44 years. They retired in 2004 and continued to be vibrant and active parts of Union civic life, participating in and supporting more than a half dozen organizations. Bobby Rippy passed away in 2012.

The Rippys have long been known for their generosity of spirit; they were giving back when they barely had anything to give. Barbara Rippy credits God first for her ability to give so generously. Not long after opening the pharmacy, when a customer had charged children’s prescriptions four times in a row, Bobby Rippy said, “As long as I live, and I’ve got any money, no child will go without their medication.” They stuck by that maxim, and when they closed, they were still owed $75,000.

“We didn’t miss one dime of that,” Barbara Rippy said. “When you’re good to people, they are good to you. After all the professors did for Bobby to help him become a pharmacist, I told Larry  that I wanted to give the College of Pharmacy $1 million so that students for years to come would have the same opportunity to fulfill their dreams of becoming pharmacists as well,” she explained, recounting her conversation with Larry Craine, her longtime financial advisor.

The lecture hall named after the Rippys in the new pharmacy facility reflects that special bond between student and professors. The state-of-the-art lecture hall is dedicated for pharmacy instruction, making it a vital and highly visible site of shared experience for every MUSC pharmacy student and faculty member.

“Having a dedicated lecture hall for them to learn and interact is essential,” said Chris Wisniewski, Pharm.D., professor and nationally acclaimed expert in pharmacy education. “New space with new technology allows faculty to experiment in the educational realm and identify new ways to educate our students.”

Founded in 1824 in Charleston, MUSC is home to the oldest medical school in the South as well as the state’s only integrated academic health sciences center, with a unique charge to serve the state through education, research and patient care. Each year, MUSC educates and trains more than 3,000 students and nearly 800 residents in six colleges: Dental Medicine, Graduate Studies, Health Professions, Medicine, Nursing and Pharmacy. MUSC brought in more than $271 million in biomedical research funds in fiscal year 2020, continuing to lead the state in obtaining National Institutes of Health funding, with more than $129.9 million. For information on academic programs, visit musc.edu.

As the clinical health system of the Medical University of South Carolina, MUSC Health is dedicated to delivering the highest quality patient care available while training generations of competent, compassionate health care providers to serve the people of South Carolina and beyond. Comprising some 2,000 beds, more than 100 outreach sites, the MUSC College of Medicine, the physicians’ practice plan and nearly 275 telehealth locations, MUSC Health owns and operates eight hospitals situated in Charleston, Chester, Florence, Lancaster and Marion counties. In 2021, for the seventh consecutive year, U.S. News & World Report named MUSC Health the No. 1 hospital in South Carolina. To learn more about clinical patient services, visit muschealth.org.

MUSC and its affiliates have collective annual budgets of $4.6 billion. The more than 20,000 MUSC team members include world-class faculty, physicians, specialty providers and scientists who deliver groundbreaking education, research, technology and patient care.