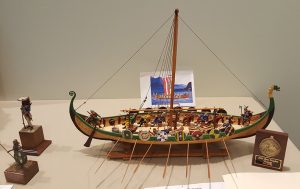 If you think a “toy soldier” is just one of those rubbery little green guys you bought from the dime store when you were a kid, you’ve got a lot to learn.

And you can learn it on Saturday, Oct. 8, at the South Carolina Confederate Relic Room & Military Museum in Columbia. The museum is hosting the South Carolina Military Miniature Society’s 31st Annual Toy Soldier Show. The show will run from 10 a.m. to 3 p.m. on Saturday, in the atrium in front of the museum, as well as upstairs in the Congaree Room and on the mezzanine.

Think of it as a sort of trade show for people involved with toy soldiers, models, action figures, sci-fi and fantasy figures, paint and supplies.

Only it’s not just for insiders; it’s open to the public, and free. Admission to the museum will also be free, all day. But bring some money if you’d like to buy something, because a lot of what you see will be on sale.

There will be a wide variety of dioramas, toy soldiers, models, and living history displays featuring Military Timeline Impressions – and a model-painting competition. Exhibitors will range from businesses such as Firefly Toys and Games of Columbia, to the Wildcat Chapter of the Armor Modeling and Preservation Society.

If you’ve been to the museum lately, you’ve seen a monumental work by the Wildcat Chapter – the huge, lifelike, meticulously detailed diorama of Fire Support Base Ripcord, site of the U.S. Army’s last major battle in Vietnam. The diorama is the first piece of the museum’s major Vietnam exhibit that will open fully in mere weeks. Members of Wildcat Chapter will be able to answer questions about how in the world they built the diorama.

This will be the first of a season of special events coming up at the museum, including:

December 10 – Pearl Harbor Day. This has been a popular event in recent years, and there will be new things to see and do. Why Dec. 10? It’s the first Saturday after the date that has lived in infamy since 1941.

February 11 – SwordFest. There are a lot of deadly-serious swords on display in the museum, but this is all about fun. You’ll see fencers, samurai fighters, medieval knights in armor, Star Wars light saber duels and much more.

March 25 (tentatively) – Revolutionary War Day. More American Revolution battles were fought in South Carolina than in any other state. Come learn about them.

Planning continues on all of the above, so watch for more details between now and dates mentioned, on the museum’s Facebook page.