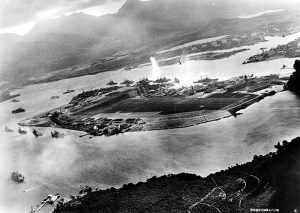 It was, as usual, a beautiful Sunday morning in Hawaii. But it didn’t last long. At 7:55 a.m., the first wave of Japanese warplanes came flying over the Waianae mountains.

Ninety minutes after the attack began, the U.S. Navy’s Pacific fleet was largely combat ineffective. Those eight mighty battleships that had been tied up so closely next to Ford Island – the main targets in the absence of the aircraft carriers – were all sunk, destroyed or close to it, as were about a dozen other ships. And 2,403 Americans were killed. While Japan talked peace in Washington.

President Franklin D. Roosevelt challenged us to remember it as “a date which will live in infamy,” and we have not forgotten. On Saturday, Dec. 10, three days after the anniversary, the South Carolina Confederate Relic Room and Military Museum will commemorate Dec. 7, 1941 – the day that changed everything.

It all starts at 10 a.m. at the museum, located at 301 Gervais St. in Columbia, and will run until 3 p.m. Admission is free during the event, as will be admission to the rest of the museum. That means our Pearl Harbor Day event also offers you a great chance to check out the major new exhibit, “A War With No Front Lines: South Carolina and the Vietnam War, 1965-1973.”

The Pearl Harbor Day displays will engage and educate visitors with artifacts and information about not only the day itself, but other facets of the Second World War, dealing with such aspects as:

Exhibits will be suitable for all ages – and, no matter how much you know already, educational.

Founded in 1896, the South Carolina Confederate Relic Room and Military Museum is an accredited museum focusing on South Carolina’s distinguished martial tradition through the Revolutionary War, Mexican War, Civil War, Spanish-American War, World Wars I and II, Vietnam, the War on Terror, and other American conflicts. It serves as the state’s military history museum by collecting, preserving, and exhibiting South Carolina’s military heritage from the colonial era to the present, and by providing superior educational experiences and programming. It recently opened a major new exhibit, “A War With No Front Lines: South Carolina and the Vietnam War, 1965-1973.” The museum is located at 301 Gervais St. in Columbia, sharing the Columbia Mills building with the State Museum. For more information, go to https://crr.sc.gov/.