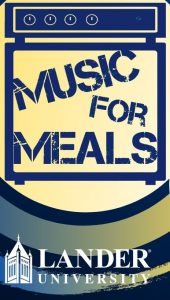 An “all you can eat” barbecue and oyster benefit Saturday, Oct. 9, will raise funds for Lander University’s Bear Necessities Food Pantry.

Titled “Music for Meals,” the event will be held from 6 – 10 p.m. at the Lander Equestrian Center, located at 221 S.C. Highway 72, and will feature live music by local musicians Ryan Pitts and Keller Ridgeway, followed by the dynamic Emerald Empire Band. Tickets are $40 each and may be purchased via EventBrite at https://bit.ly/3kiLqUN through Oct. 1. Drink tickets are $4 in advance or $5 at the door. General admission student tickets for $10 also are available from EventBrite through Oct. 1.

“Lander faculty and staff realized several years ago that many students faced problems with food insecurity, a silent problem that has existed for quite some time on college campuses throughout the United States,” he said.

Lander’s food pantry opened in August last year through a partnership with the Food Bank of Greenwood County. The food pantry receives a variety of canned goods, frozen and pre-packaged foods, breads and pastries and other food items requested by students. Individual donors, churches and area organizations have contributed to the food pantry as well.

“We are grateful for the outstanding support that we have received from the Food Bank and other community friends and donors,” Yarbrough said. “In the first year, the program grew to serve as many 80 students a week.”

Although the food pantry is staffed with University volunteers, Yarbrough said the University may need to hire a person to oversee its management as the program grows.

A study conducted earlier this year by Dr. Zach Rubin, a Lander University assistant professor of sociology, found that more than half of Lander’s student body struggle with having enough food to eat on a regular basis – a figure consistent with other studies done at college campuses throughout the nation.

The study also addressed the problem of housing insecurity at Lander, a problem that plagues many U.S. college students.

At Lander, for example, about 26 percent of the students surveyed experienced at least one of the major indicators of housing insecurity. Those factors include difficulty paying rent, difficulty paying utilities, adding roommates to share costs or moving in with other people.

Other students reported problems of homelessness, which included being evicted from their homes, staying in an abandoned building or a car or not having a regular place to sleep. Some reported that they had stayed in a homeless shelter.

“Fortunately, because Lander has a strong residential aspect to its campus, the University has lower housing insecurity compared to others throughout the United States,” he said.

The study, which also examined the number of students receiving grants, scholarships and loans, as well as the number of hours worked by students in jobs both on and off campus, provides the foundation for understanding the many factors associated with food and housing insecurities at the University, said Rubin, who has volunteered with the food pantry since its opening.

“This study gives us a more comprehensive view of our students’ needs and the challenges they face, many of which became greater because of the pandemic,” he said.

The food pantry is an important first step in the process of helping students have a successful college experience. “The work done in the first year of the food pantry was exceptional,” Rubin said.