After Mom died, my sisters and I began to go through her and Dad’s belongings. Quite a task that surprised, amused, and puzzled us. Lots of “stuff.” Our parents grew up in the shadow of the Great Depression and threw nothing away. What to keep? That task became our lot.

My sisters wanted me to have Mom’s family Bible. “You’re the family historian.” So, I brought it home. For six years the good book sat unopened. At last I decided to look through it. Here, too, Mom had refused to throw things away, but not just any old thing. Forget psychology. If you want to know what people value, look through their Bible. I did and a flood of memories swept me into the past. 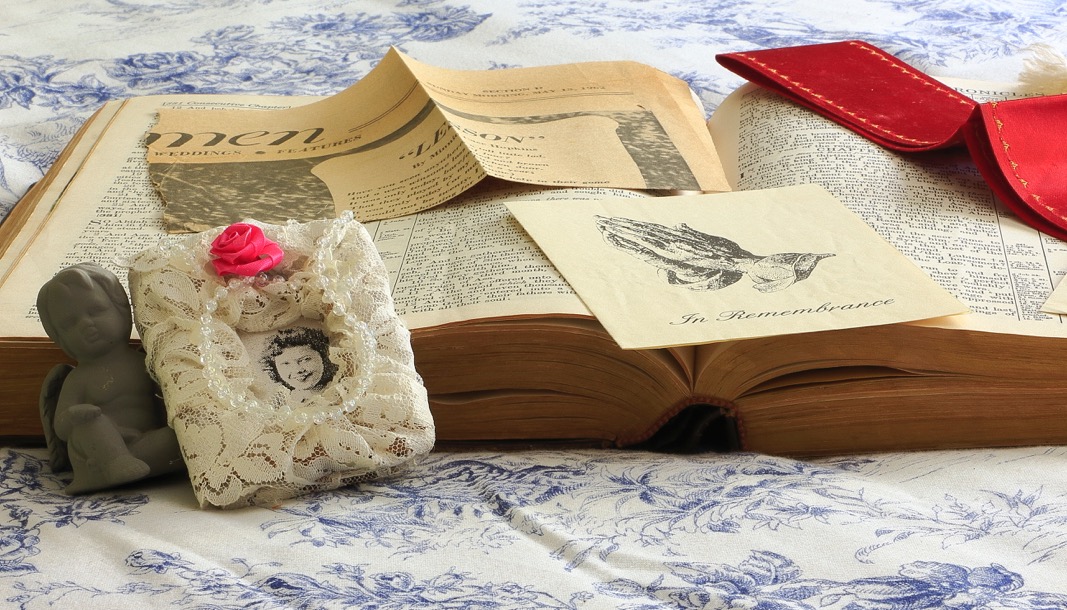 A revelation was hiding in the Bible. Mom clipped a poem, “Lessons Learned,” from the Augusta Herald, May 13, 1962. The poem’s about a mother who never took time to play with her boy and girl. “It was only today, barefooted and brown/That they played by my kitchen door. It was only today (or maybe a year; It could not be twenty, I know)/They were shouting for me to help in their game/But I was too busy to go.”

The poem continues until the end when … “Somewhere, I am sure they’ll be playing again/And should they be calling for me/To come out and help, Oh tell them, I beg/I’m coming as fast as can be. For it’s never a house would hold me today/Should I hear them call me to share in their play.” I don’t know if she had regrets or just liked the poem, but it set me to thinking.

I found clippings of her brothers’ funerals but not a one of her sisters with good reason. Mom was the first of the five girls to die. Alongside the remembrances are photos. Uncle Carroll, a veteran of the Korean War, at the Rhodes Fly-in Reunion. It too is no more. Cousin Ronnie Walker who died at 49. His dad, Uncle Don, who died not quite two years later. Uncle George’s “In Remembrance” made me remember how we talked about fishing and Georgia football. Uncle George stormed France come a day called D-Day.

In her distinctive penmanship Mom listed her ancestors. The names Walker, Bolton, Rhodes, and Brown dominate the list. Among them Georgia Brown Walker, Isaac Newton Bolton, Daniel Lumpkin Walker who fought in the Civil War, and other ancestors including Pullens, Downers, Andrews, and one Wheatley, Esther.

Photos, of course, Mom and Dad at Pigeon Forge in 1999. Dad looks remarkably happy. In four years he would die from a horrible cancer, esophageal. In twelve years Mom would succumb to lung disease. As they lay dying, the Bible patiently waited for me to discover its contents. Not one mention of Dad and his death in that book. It was too terrible.

Other items? Two large silk ribbons, one red, one yellow. I have no clue what the ribbons signify but each has a fragrance similar to talcum powder or a vintage grandmother’s parlor. I found a bookmarker from my daughter, Beth, on the occasion of her marriage, November 11, 1995, a snowy night in Blacksburg, Virginia. Seems like yesterday but all her children are grown.

I came across Mom and Dad’s certificates of faithfulness signed by the Rev. Terry B. Joyner. My parents’ marriage certificate, April 11, 1947. Clippings of Walker family reunions. Nothing earthshaking, just evidence of lives lived. In the end, when others are gone we the living are left with records and memories.

My mother loved her family as much or more, I’ll say, as her own children. Nothing made her happier than to visit with her brothers and sisters. They’d talk and laugh and recall earlier times and people long gone.

Keeping records of reunions, church and faith, and honoring the deceased—Mom did that. She never got to go to college. Big deal. She became a curator of the family archives. She’s a breed on the way out. I don’t think today’s young set keeps records in Bibles or attends reunions but what do I know. Maybe they have some app or website that does that. It’ll never age and yellow like paper, never take on that old parlor smell, and, they can search through it from their phone, but—

What if new technologies render their family records and memories obsolete. What a loss.