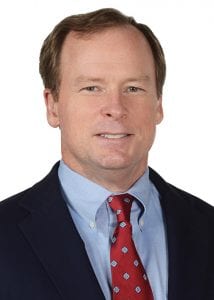 Jennings is assuming daily leadership of more than 81 attorneys and staff members. He joined the firm in 2006 as a partner in the corporate and securities practice, particularly focusing on public companies and financial institutions. He will maintain his robust practices in the areas of mergers and acquisitions, securities offerings, public company reporting, executive compensation, and corporate governance.

“I am honored to follow in Tim’s footsteps and serve the attorneys and staff in Greenville during this time of growth in the firm,” Jennings said. “Our Greenville office has truly exceptional attorneys who are committed to their clients. I hope to use what I have learned from Tim’s leadership to continue our service to clients and to look for opportunities to continue to grow with the Upstate.”

He has been recognized by The Best Lawyers in America® for his Corporate Governance, Mergers, and Acquisitions practice (2011-2020) as well as his Securities/Capital Markets work (2009-2020). Chambers USA: America’s Leading Lawyers for Business has ranked him for the past nine years in Corporate M&A and Corporate M&A: Banking and Finance. The legal publisher also named him Lawyer of the Year in Greenville for four years, including 2020.

Jennings was tied for the third most active lead attorney in the country in large bank mergers included in a Sandler O’Neill data review for the 12 months ended Jan. 31, 2019. He is part of the Financial Institutions Corporate & Regulatory Group that has been ranked the No. 4 legal advisor in the 2019 S&P Global Market Intelligence League Tables for the US Banking sector, when ranked by deal value.

The firm opened its Greenville office in 1987 when former Gov. Richard W. “Dick” Riley and his father Ted Riley joined the firm. The firm welcomed David H. Wilkins, a former speaker of the South Carolina House of Representatives and former U.S. ambassador to Canada, as a partner in the Greenville office in 2009. The Greenville attorneys represent many of the businesses, financial services institutions, and manufacturers in the region and beyond and also contribute to various upstate boards and commissions working to improve the lives and opportunities for Upstate South Carolina residents.