The Board of Directors is pleased to announce the hiring of Mr. Harold E. Nichols as the new Chief Executive Officer of the Clinton YMCA. Mr. Nichols will assume his position on April 1, 2021.

The Clinton YMCA Board of Directors named a search committee that began working last summer, utilizing resources provided by YMCA of the USA. Kay Cleveland, chair of the search committee, stated, “We conducted a nationwide search that generated a tremendous amount of interest and numerous highly qualified candidates. However, we could not be more thrilled that the candidate who rose to the top and was our unanimous selection was someone right here in Clinton, SC.”

Mr. Nichols comes to the YMCA from Presbyterian College, where he most recently served as Assistant Athletic Director for Development since 2017. Prior to that position, he was the head football coach for eight years. As Assistant AD, he was responsible for planning and directing the overall program of fundraising for athletics, to include annual giving, facility upgrades, and other major gift opportunities. 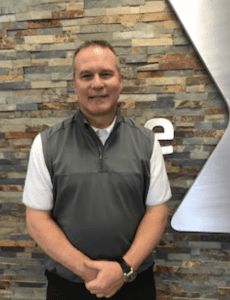 After graduating from Presbyterian College with a degree in political science and a minor in physical education, Nichols began his football coaching career on the Blue Hose sideline in 1990. Since that time, he has coached at Georgia Southern University, returned to Presbyterian College in 1996, and was Associate Head Coach and Offensive Coordinator at the University of Rhode Island from 2000-2008. Prior to his return to PC as head coach, Mr. Nichols was Assistant Football Coach and Offensive Coordinator at Bucknell University.

Mr. Nichols experiences in relationship building among people and teams, leadership positions and fund raising will be assets to the YMCA’s staff, consumers, and programs into the future.“We knew we had big shoes to fill after the leadership Gene Simmons provided to the Clinton YMCA for 40 years, so we wanted to be sure we got it right,” said Clinton YMCA board chair, Harriett Reid. “We are very excited to begin a new era of leadership under Harold, and look forward to working together with him and the great staff we have at the Y to provide programs and resources for the Clinton community.”

Mr. Nichols stated, “I am looking forward to joining the YMCA family and appreciate the opportunity to serve the people of the Clinton community. I want to thank the Board, the staff, and the YMCA USA for entrusting me with the recreational hub of our great town.”

Mr. Nichols is married to PC Senior Associate AD Dee Nichols. They have three children, Cassie, and twins Corey and Cameron. They are members of First Presbyterian Church. The family resides in Clinton.

The YMCA Board wishes to express its appreciation to Patti Nelson for serving as the interim CEO since January 1, and to Brian Shealy, Laura Martin, and the remainder of the staff for serving skillfully and enthusiastically during this period of transition.