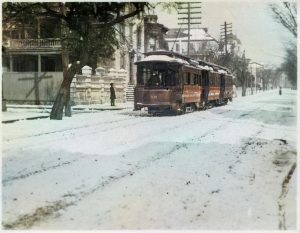 The Charleston Museum will present A Winter Wonderland in Color: Snow Scenes of Charleston opening on November 1 in the Lowcountry Image Gallery. Heavy snowfalls are a rarity in Charleston, as the Lowcountry is more well known for its mild winters. However, our temperate winter climate occasionally experiences a snow storm that blankets the city in white for more than a mere hour or two. This exhibit showcases colorized photographs of remarkable snow days captured by residents of Charleston dating to the late 19th and early 20th centuries.
For years, photograph colorization was used mainly by high tech production companies. Recently however, computer programmers have created colorization operating systems that use Artificial Intelligence. Modeled after the human brain, the AI software can recognize objects in a photograph and determine their likely colors. Although, it can still be time consuming and rather tricky, colorizing a historical photograph is now more accessible to everyday users. Visitors are invited to enjoy this collection from the Museum’s Archives through a new lens of colorization.
The Lowcountry Image Gallery is an exhibition gallery that showcases previously unseen photography and other works of art from the Museum Archives. Comprising over 40,000 photographs and representing a variety of themes, subjects and locations from around the Charleston area, this collection provides a glimpse into Lowcountry life from the dawn of the photography era to the present.
Posted in Charleston, SC