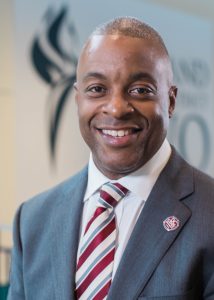 “On behalf of the entire Richland Two family, I want to thank Dr. Guy for her years of service in Richland Two, especially for the invaluable leadership she provided during the opening of Westwood High School and during her years as principals,” said Dr. Baron R. Davis, Richland Two Superintendent.

“During Mr. Jackson’s time as principal at Longleaf Middle, he has inspired and developed others, led innovation and positive change, and achieved premier results. His breadth of experience as a teacher, coach, assistant principal and principal provides him with a solid foundation for his next leadership role as the principal of Westwood High School.”

Jackson currently serves as the principal at Longleaf Middle School. Jackson joined the Richland Two family in 2002 and served as a health and physical education teacher and head basketball coach. He left Richland Two in 2004 to become an assistant principal at Barnwell High School and has since been assistant principal for Instruction at Dutch Fork High School and principal of Irmo Middle School, International Academic Magnet.

“I am honored to be joining the Westwood High School family. It is a premier school steeped in tradition and innovation. I am looking forward to hitting the ground running and partnering with the school and community in pursuit of excellence in academics, athletics, the arts, and social-emotional development,” said Jackson.

Jackson is married to Kaseena Jackson, principal of Langford Elementary School, and they have an 11 year old daughter, Kristian.

The search for the next Longleaf Middle principal is underway.