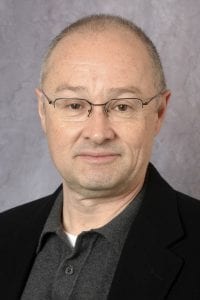 Nicholas Vazsonyi has been chosen to lead the College of Architecture, Arts and Humanities. He is currently chair of the Department of Languages, Literatures and Cultures, and Jesse Chapman Alcorn Memorial Professor of Languages at the University of South Carolina.

Vazsonyi will begin his new position at Clemson University on July 1, 2020.

“We welcome Dr. Vazsonyi as our newest dean, and look forward to his dynamic leadership,” said Robert H. Jones, executive vice president for academic affairs and provost at Clemson University. “Nicholas is a global thinker who understands the challenges of the future, a scholar who recognizes the full value of both design and humanities disciplines in the College, and he is a leader who never forgets that people are the heart of a university.”

Vazsonyi comes to Clemson after seven years as chair of the most complex and highest credit-hour producing department within the largest college at the University of South Carolina. In that role, he directed 11 language programs, supervised 65 full-time faculty and managed sizable budgets. During his tenure as chair, the number of enrolled students in his department increased by 50 percent. Vazsonyi guided a strategic planning process, began online courses, and recently launched a division offering additional languages, including ASL, Korean and Hebrew.

“I am thrilled to be joining Clemson at an exciting time of growth with the ambitious plans laid out in ClemsonForward,” Vazsonyi said. “The College offers a unique combination of disciplines that, individually and collectively, speak directly to who we are as human beings and as a culture and civilization.”

Provost Jones thanked Timothy R. Boosinger, a former provost of Auburn University, for his service since September as interim dean of the College of Architecture, Arts and Humanities, and his stewardship of the early phases of the dean search. “Tim has been an exemplary leader of the College, and will continue in his role through the spring semester, working closely with incoming dean Vazsonyi to ensure a smooth transition in leadership.”

The College of Architecture, Arts and Humanities (CAAH) includes the School of Architecture; the Nieri Family Department of Construction Science and Management; and departments of Art; City Planning and Real Estate Development; English; History; Languages; Performing Arts; and Philosophy and Religion.