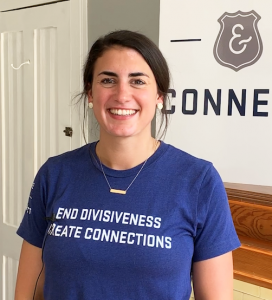 The Who’s on the Move, BizSC, Non Profit Minute is a quick, one minute interview in support of the amazing impact that local non profits have on our communities.

We would like to thank our sponsors of this video series – The Sisters of Charity Foundation and NP Strategy.

Kassy Alia Ray is the Founder and CEO of Serve & Connect. She founded Serve & Connect in memory of her late husband, Officer Gregory Alia who was killed in the line of duty in 2015. Under her leadership, Serve & Connect has grown from a hashtag to a movement for change, touching countless lives and receiving national attention for its impact.

Kassy has received several awards in recognition of her service to community, including the South Carolina Law Enforcement Citizen of the Year (2016), Central Carolina Community Foundation’s Individual Philanthropist of the Year (2017), the Post and Courier’s Golden Pen Award (2017), City of Columbia Police Department’s Outstanding Citizen (2018), and The State Newspaper’s “Top 20 under 40” (2018).