Old island haunts. The fever to develop islands didn’t destroy all of them. In a few instances, someone decided, “Not for sale.” And so you can still find old stores, cafes, and restaurants on islands tethered to bridges. The Pelican Inn at Pawleys Island comes to mind and so does Pawleys’ Sea View Island.

Otherwise, when I think of weather-beaten boards, fading Coca Cola signs, and tin roofs, I see dusty lanes in the countryside where old Coke stores watch life go by. I see a small-town café that still dresses as it did 50 years ago. So, coming across Hazel’s Café on St. Simons Island surprised me.

Hazel’s Café is one of those places that bring the camera out. It’s a place that makes you curious. When I got back to my Carolina office, I looked up Hazel’s Café and found a fine feature on it in The Brunswick News, Larry Hobbs’s “Hazel’s Café a throwback to Island’s past.” 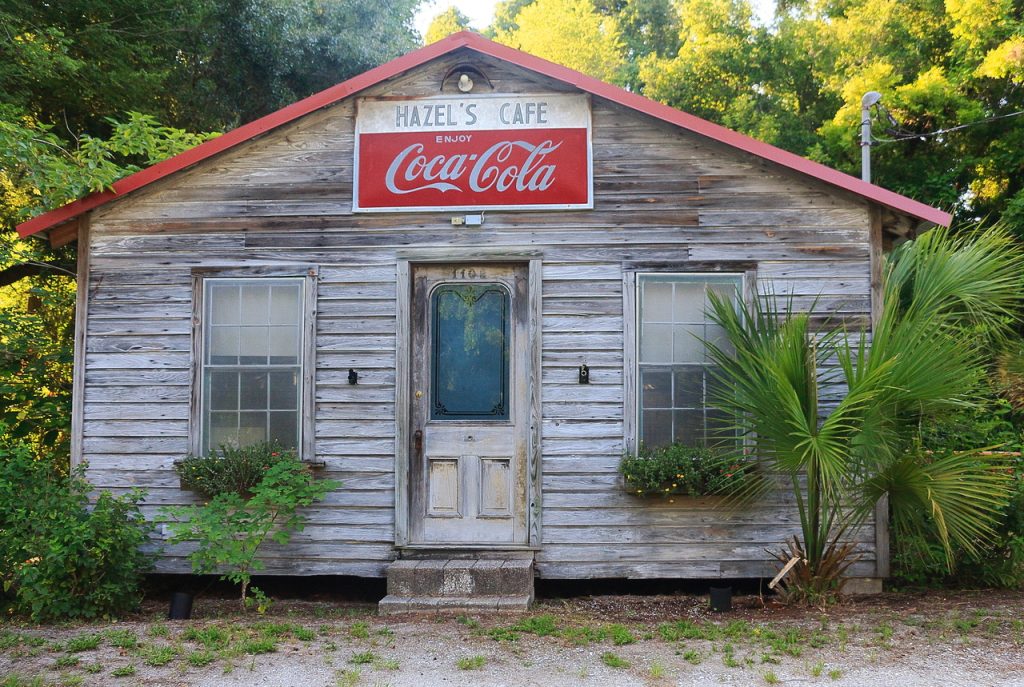 I learned from Hobbs’s feature that the store was an African-American enterprise. Hobbs’s words … “Hazel and Thomas Floyd opened the cafe in 1947, banking on the post-war economic boom to generate business. Boy, did it. Hazel’s Cafe already was an iconic relic when it finally closed its doors to customers in 1978, some 40 years ago. (Now 44 years)

“Thomas was from Hazlehurst, arriving on St. Simons Island after serving in the Army during World War II (1941-45). He was a darned good cook. Hazel was an island native, ready for a change of pace after having worked in Brunswick’s Liberty Ship yards during the war years. Together, the couple whipped up a recipe for success that would feed the community for three decades.”

Hobbs got to go inside the old café with Amy Roberts to whom Hazel was a cousin on her mother’s side. The place still looks like it did when it was thriving. The place is being preserved, and that’s a story of its own. Fred Mars, owner of Pane in the Glass, (Yes, you read that right) bought Hazel’s Café with the goal of moving his business there but new zoning laws got in the way. So, on college football Saturdays Georgia Bulldog fans bring the red and black to Hazel’s Cafe. “They are the guests of St. Simons Islander and diehard Dawg fan Fred Marrs,” wrote Hobbs.

Marrs bought Hazel’s Café in 1994. “We grill out back and have a lot of fun with it. Mainly, we just watch Georgia football,” said Marrs.

Hobbs closed out his feature in a way that puts a smile on your face. “Inside Hazel’s Cafe, little has changed except for a couple of modest flat-screen television sets, a billiards table and some track lighting. The many black and white photos of the island’s yesteryears include a portrait of the old proprietors, a handsome couple indeed.

“The home Hazel and Thomas lived in remains standing next door, used today for storage. Fred intends for this little piece of the island’s past to stand for a long time to come.

“It’s going to be willed to my daughter and she said she’s not going to do anything with it,” Fred said. “It’s just going to be Hazel’s. It’s one of those things you keep forever.”

One of those things you keep forever—the smiles part. I added Hazel’s Café to my list of old island haunts. Thanks to Larry Hobbs and Fred Marrs, the mystery of the beautiful window-box flowers is solved.

Football season is here and “Go Dawgs” and no small amount of barking will be heard along Demere Road down St. Simons Island way in a throwback place called Hazel’s Café. Long may it prevail.