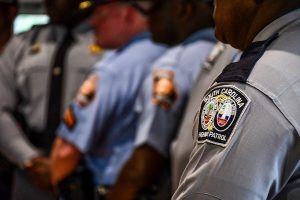 A joint press conference between SC and GA law enforcement partners was held today in Augusta, GA to announce Operation Southern Slow Down, a weeklong speed enforcement and education campaign aimed at stopping the number of drivers traveling at speeds well above the legal limit.

Formerly known as “Operation Southern Shield,” this campaign will see state and local law enforcement officers in Alabama, Florida, Georgia, South Carolina, and Tennessee will conduct concentrated enforcement on interstates and state highways to stop the increase in drivers traveling at speeds well above the legal limit.
Law enforcement in the Southeast and across the nation have seen a substantial increase in the number of vehicles traveling at speeds over 100 mph in the past two years.

The South Carolina Highway Patrol will increase its speed enforcement efforts along several interstates and highways from July 19 – July 22.