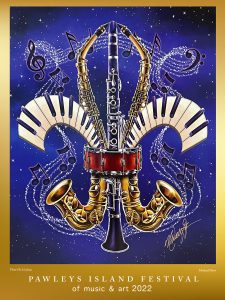 Pawleys Island Festival of Music & Art has announced that Michael Hunt’s Fleur De Lis Jazz, has been chosen as the image to adorn this year’s Festival materials.

“We simply love this image. It’s bright, fun, and exciting, and we love the story of this talented artist,” said the Festival’s Executive Director, Delores Blount.

Michael Hunt began his art career in a most humble manner. While still a student at LSU he created a work of art paying tribute to the university. With meager startup money he had saved since childhood, he printed a few hundred posters. Using a shopping cart, he wheeled around the school before and after football games selling rolled copies. That first poster sold more than 70,000 copies within weeks. To this day it remains one of the most successful collegiate posters of all time.

Using the money, he was able to start his own company devoted to creating posters from his art. As the years passed, Michael became one of the most successful poster artists in the world currently having sold over one million copies of his work.

Michael’s posters are included in the permanent collections of The Rock and Roll Hall of Fame, The World War II museum, The Louisiana State Archives, the Louvre in Paris, The Vatican, and the White House.

“We are excited to introduce Michael’s art to the Lowcountry. We believe this year’s image will be one that is treasured by Festival goers for years to come,” continued Blount.

About the Pawleys Island Festival of Music & Art

The Pawleys Island Festival of Music & Art, held at The Reserve Golf Club of Pawleys Island, is a 501(c)(3) which features three weeks of cultural entertainment and musical performances, including a Wine & Food Gala that serves as the event’s primary fundraiser.

For more information and the latest updates on the Pawleys Island Festival of Music & Art, along with sponsorship and membership opportunities, visit them online at http://www.pawleysmusic.com/ or call 843-626-8911.