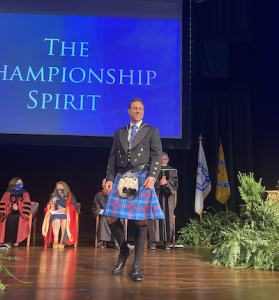 A storied history. A challenging present. An audacious plan for the future.

In front of family, faculty, staff, students, alumni, and delegates from all over the state and the country, vandenBerg challenged the College and pledged himself to seize this moment in the College’s history.

“The truth of the matter is that inaugurations are not celebrations of presidents,” he said. “They’re inflection points in an institution’s trajectory. Done well, they remind us of the heroics of the past. They acknowledge the opportunities and challenges of the present. And they galvanize us for the work of the future.”

vandenBerg reminded the gathering that the Rev. Dr. William Plumer Jacobs founded PC in 1880 on a simple premise – a dream of educating Civil War orphans. Jacobs, he said, wrote in his diary: “I have at last set my heart on a plan; It is nothing more nor less than the establishment of a college in Clinton.  It will take a vast outlay of time and money, but it will be done, and God willing, it shall be done.”

Over the years since, PC has shared many of the same challenges other small, private, liberal arts colleges in rural America face, vandenBerg said. 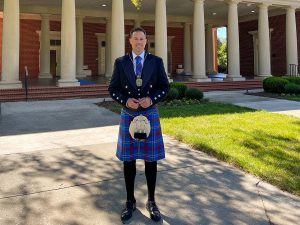 “Like others, PC prayed, toiled, fought, and pulled itself back from the brink, time and again over the decades. They persisted, grew, and prevailed through wars, pandemics, booms, busts, and constant change.”

Now, PC is a first-rate residential liberal arts college where students meet faculty and staff who are “resolutely – and uniformly – committed” to their success, vandenBerg said.

But like many other residential liberal arts colleges, PC also faces many troubling challenges – and many have overcompensated by discounting tuition at steep and growing rate.

“We’ve tended to either cut our budgets to the bone or to keep adding programs and stretch to be all things to all people, watering down our mission and leaving us feeling less sure of who we are,” vandenBerg said. “There are 60 post-secondary institutions in South Carolina alone. It is no longer possible to differentiate ourselves by focusing merely on small class sizes, caring faculty, or alumni success stories. Literally everyone does that now.”

“So here we are. We were made for this moment. And with a shared sense of purpose, a creative spirit, and sustained focus, we will rise like the tide,” he said.

There are bountiful opportunities for PC to demonstrate why it is the best choice for many students , vandenBerg said. 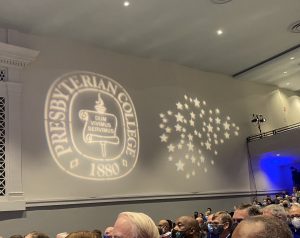 “We’ll pick a niche and win,” he said. “We’ll put our considerable resources to work because – make no mistake about it – we do not exist to maintain what we have. We’re called to propel students, to serve our community, and to improve the world. ‘To whom much is given, much is required.’ That’s not a line from Spider-Man, that’s Luke, Chapter 12.”

A powerful lesson from PC’s history will inspire its path forward, said vandenBerg.

The grandson of PC’s founder, William Plumer Jacobs II, was also a young president during a turbulent period in history – the Great Depression. In 1935, the College’s 12th president faced mounting debt and not many students. But Jacobs met those threats head-on by leading the college to expand its curriculum, aggressively recruit new students in Presbyterian churches, and make news with relevant and distinctive new programs.

Already, vandenBerg noted, PC is embracing that same spirit with several significant announcements that will benefit students right away, including:

But the Championship Spirit is indeed being propelled by PC’s historic strengths – service, entrepreneurship, and a renewed relationship with the Presbyterian Church (USA).

On Oct. 18 in Greenville, the College announced the launch of the largest service entrepreneurship case competition in South Carolina and one of the largest in American higher education. Open to every high school senior in the state, winners in the competition will receive a full-ride scholarship to PC, the support of experts, and up to $10,000 to implement their ideas.

vandenBerg thanked two champions of PC – alumni Chad and Pam Prashad for their vision and gifts to bring the competition alive. The Prashads also were thanked for their seven-figure gift “to cement PC’s role and legacy as the nation’s leading college for students affected by foster care.”

On Oct. 19, PC announced its partnership with the Indiana University O’Neill School of Public and Environmental Affairs – one of the top three in the nation for public affairs. PC seniors and PC alumni will receive preferred admissions and a guaranteed scholarship to all O’Neill master’s degree programs, vandenBerg said.

However, perhaps the most important news for many came from the new president’s vision to become the nation’s premier Presbyterian College for the Presbyterian Church (USA).

“Today is a truly historic day for PC’s relationship with the Presbyterian Church,” he said. ” Now, more than ever, we must understand on a fundamental level what it means to be a college in the Presbyterian faith. 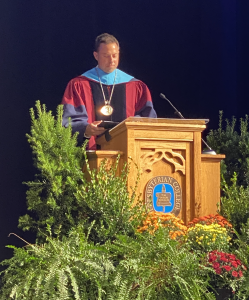 “Our Presbyterian identity traces back to a simple but powerful idea originating from the Great Reformers – that vocation isn’t a term that applies just to clergy. In fact, we believe God calls each of us. Every single person on this planet has a calling – a vocation.  And as colleges in the Presbyterian tradition, we believe it’s our purpose to help students discover and vigorously pursue their vocation.”

What PC has in common with the other 54 Presbyterian colleges and universities in the US, said vandenBerg, is fear of being labeled a “church school.”

That will change at PC, he said.

“Today, PC announces our intention to run back to the church in distinctive fashion, especially in terms of our relationships and common values, including pluralism, hospitality, service, justice, and grace,” he said. “We are – and we seek to further cement our status as – the nation’s premier Presbyterian college – the flagship institution for the Presbyterian Church.”

Last Sunday, the College and First Presbyterian Church, Myrtle Beach, announced the launch of the PC Promise. Eligible seniors affiliated with the church can enroll at PC at no tuition cost to them through support from the church and scholarships at PC. vandenBerg said he anticipates many more Promise Programs with churches throughout the Southeast thanks to an anonymous seven-figure gift to fuel expansion.

Another anonymous gift – one of the largest in PC history – honors Jane Presseau and the Rev. Dr. Jack Presseau, the founder of the College’s Christian education program and Student Volunteer Services. The newly-endowed Jack and Jane Presseau Associate Chaplain position will be held by the Rev. Racquel Gill, currently assistant chaplain for multicultural community engagement.

In response to that act of kindness, vandenBerg announced, the Presseaus created an endowed fund to provide for SVS in perpetuity.

“As members of the PC community, we strive to be a welcoming, nurturing, and empowering institution for all,” vandenBerg said. “We seek to become a microcosm of the dynamic and diverse world into which our students will enter and must succeed. We reflect on Micah 6:8, which reminds us to act justly, to love mercy, and to walk humbly with our God. So, with pride in our past and with our sense of Christian humility, we embrace the opportunity and necessity to grow, stretch, and flex to support all members of our entire campus community.”

vandenBerg’s final announcement was a blockbuster – the largest single gift in the College’s history.

PC’s board chair, E.G. Lassiter ’69, and his wife, Marianne ’71, gave their alma mater $5 million to endow the Marianne and E.G. Lassiter Chaplain and Dean of Spiritual Life position.

vandenBerg called it “one of the most transformative and consequential gifts in our history.”

“Their latest act of vision, generosity, and faith makes PC’s commitment to the Presbyterian Church nothing short of elite and historic,” he said. 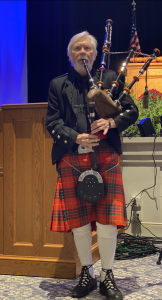 PC’s 19th president closed with a reminder that it is human to feel exhausted and hold on when times are challenging and complex. But those who share the Championship Spirit – like Scottish-Presbyterian missionary and Olympic sprinter Eric Liddell during the 1924 Paris Olympics – discover a more profound commitment to meet those challenges.

Quoting from the 1981 film dramatizing Liddell’s Olympic triumph – “Chariots of Fire” – Liddell’s character famously said: “So where does the power come from to see the race to its end? From within. I believe God made me for a purpose. He also made me fast. And when I run, I feel His pleasure.”

“And with that, Liddel dug deep, he threw himself even further into his unusual running style, and he ran an even faster second half of the race, winning gold in epic fashion,” said vandenBerg. “That is championship confidence. That is championship effort. That is the championship spirit. PC’s race is off to a phenomenal start. And while others might gasp for breath, or pause to collect themselves, or just get by, we’ll dig deep, we’ll throw ourselves even further into our work, and we’ll run an even faster second half of the race.

“I believe God made PC for a purpose. He also made us fast. And when we run, we feel his pleasure. PC’s championship spirit is booming, and it’s here to stay. It resides in each of us. So, let’s run.”