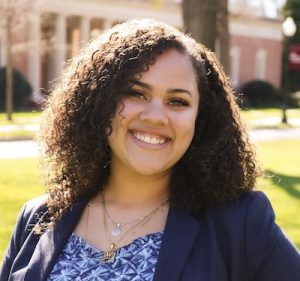 Presbyterian College junior Kennedy Wright has been named a finalist for a 2022 Truman Scholarship, one of the country’s most prestigious national fellowships.

Wright is one of only 189 finalists nationwide and one of only two in South Carolina who are vying for the coveted scholarships. Truman Scholarships are awarded annually to college students to attend graduate school in preparation for careers in government or other public service. Approximately 900 students representing more than 300 institutions apply each year, but only 50-65 of these highly-competitive scholarships are awarded.

“Being named a finalist means the absolute world to me,” Wright said. “I love that I can represent PC and South Carolina.”

The Greenville native plans to go to law school and pursue a career as a civil rights attorney. Those aspirations, she said, were forged from personal experience as a bi-racial woman and from the country’s racial unrest in 2020.

Wright said PC taught her from day one to be bold, use her voice, and never apologize for being herself – all lessons she conveyed in her application to become the college’s first Truman Scholar.

“I am exceedingly proud of Kennedy for garnering this extraordinary and well-deserved national recognition,” said college president Dr. Matthew vandenBerg. “She is an eminently dedicated and gifted student, a compassionate and emotionally intelligent campus leader, and a passionate advocate for equity and inclusion. She has the requisite talent, tools, and tenacity to champion change in her community, her nation, and even the world. She represents the best the Blue Hose have to offer.”

Assistant professor of political science Dr. Ben Bailey helped guide Wright through the application process and encouraged her to remain true to herself.

“Kennedy is a strong candidate not only because of her experiences serving PC and the community but also because she exudes authenticity,” he said. “This makes her unique among Truman Scholarship finalists.”

Dr. Erin McAdams, an associate professor of political science at PC, said Wright demonstrates all of the traits – academic success, leadership, and dedication to public service – the Truman Foundation looks for in a scholarship candidate.

“Kennedy is one of the most impressive students that I have encountered in my 15 years of collegiate teaching,” McAdams said. “I believe that her background, experiences, and education have all led her to identify a specific career path that will allow her to best intersect her intellectual talents and skills with her passion to help solve a specific societal need.”

McAdams and Wright served on PC’s Moving Forward Together committee in 2020 to address systemic racism. Wright called serving on the committee one of her proudest accomplishments.

“Being a part of it, working with members of the Board of Trustees, faculty, staff and students – and then seeing our work but into place was very rewarding,” she said.

Wright has served as secretary-treasurer and president of PC’s Multicultural Student Union, as an orientation leader, and is the current student body president.

A Dean’s List student throughout her academic career at PC, Wright will spend this summer in the nation’s capital for a class at George Mason University and an internship through the Fund for American Studies.

The Harry S. Truman Scholarship Foundation, established by Congress in 1975 as a memorial to the 33rd president, awards scholarships for college students to attend graduate school in preparation for careers in government or elsewhere in public service. The foundation has named more than 3,000 Truman Scholars since the first awards were granted in 1977. They are leaders in academia, research, health care, and the U.S. Armed Services.