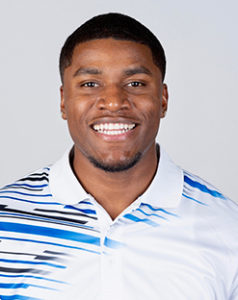 Grab your controllers and buckle up, Blue Hose. Presbyterian College is getting in the game.

PC’s new esports program continues to build momentum. This week, the College announced that professional gamer and brand ambassador Tyrelle Appleton will be the Blue Hose’ first director of esports.

The big news follows the equally exciting announcement last month that PC has purchased the Capitol Theatre in Laurens and will turn it into the headquarters for esports. Laurens District High School and Clinton High School teams will join the Blue Hose on Laurens’ historic Public Square.

“Collegiate esports is enjoying tremendous popularity and explosive growth,” said PC president Dr. Matthew vandenBerg. “In just the last handful of years, around 200 schools have added esports programs. The launch of PC’s new esports team, housed in an historic and distinctive arena, is yet another example of PC’s progress toward becoming one of the most socially engaging small colleges in America. I am excited to partner with Tyrelle to make PC into an esports powerhouse.”

Appleton brings a wealth of experience, knowledge, and enthusiasm to the new program. First and foremost, he is a competitor. Appleton partnered with Twitch.tv as a player in professional athlete and celebrity tournaments, which earned him a feature on ESPN’s Twitch channel for the $50,000 Rise Together Warzone Tournament.  In 2015, while serving as a brand ambassador for Major League Gaming, he was recognized as the first competitive Gears of War player to become an MLG partner. As a brand ambassador for Unikrn in 2020, he won the $50,000 Pro Streaming Global Contest.

Appleton also has a strong background in marketing and experience developing and directing a collegiate esports program. As the esports program director at New England College, he managed all aspects of the college’s program – working with players to develop skills and improve levels of play.

Appleton said his goal is to develop a desirable program for all gamers and students who want to learn more about esports.

“I want PC to become the epicenter of esports in the Carolinas – to serve the community and make history,” he said. “It’s more than just a game; it’s about being inspired for life. Once the arena is complete, it will be an inclusive space that will bring together a diverse array of groups.”

Appleton said that building a winning program in a new sport at PC will blaze trails for future students.

“We want to empower everyone who is a part of our program to envision and achieve opportunities and life goals,” he said. “I live, breathe, and have built my career in gaming. I thank God that I can pay it forward and help others in life.”

Appleton is an alumnus of the College of St. Joseph in Rutland, Vt. He earned a bachelor’s degree in sports management and a master’s degree in business administration.

PC athletic director Rob Acunto said he is excited to have Appleton develop and lead the Blue Hose esports program.

“Tyrelle has the experience and knowledge necessary to launch a highly successful esports program, and his charismatic and genuine personality makes him a great ambassador for the sport and the College,” he said.

Professor of history Dr. Stefan Wiecki led the search committee that aggressively recruited and found an all-star talent to lead esports at PC.

“I am proud that PC was able to recruit an all-star talent like Tyrelle,” he said. “His hire ensures that PC’s esports program will be nationally competitive. I am also excited that the PC esports arena will be located in a historic building in the heart of Laurens and will bring together collegiate and high school esports. This is unique in the U.S.”

A grant from the City of Laurens and the Laurens Commission of Public Works allowed PC to purchase and renovate the Capitol Theatre. In addition to serving as an arena for esports, the venue will continue to serve as a movie theater and will blossom into a performing arts center. vandenBerg said the public-private partnership behind the Capitol Theatre will attract community and regional attention for cultural, social, and entertainment events.

“The City of Laurens has gone without a public stage for performing arts and entertainment since 1929,” said Laurens Mayor Nathan Senn. “By PC purchasing this historic theater and bringing it back to life as both an entertainment venue and an e-sports arena, the college is doing more than simply renovating a building. This partnership will help bring life back into the arts scene of an entire community in a way we cannot yet fully comprehend. The possibilities are incredible and exciting.”