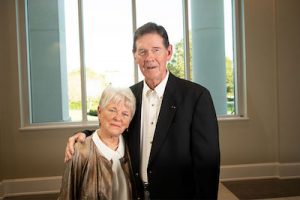 We are sad to share the news that Presbyterian College’s “Action Joe” passed away Tuesday, Aug. 24, 2021, in Clinton. Joseph O. Nixon, the College’s longtime dean of students and vice president for student affairs was 81.A 1962 graduate of PC, Nixon was forever proud to be a member of the 1960 Tangerine Bowl team and a former football captain of the Blue Hose. He also proudly served his country, serving in the U.S. Army after graduating and later as a member of the S.C. Army National Guard, where he rose to the rank of brigadier general over a 28-year career. Dean Nixon served on the PC ROTC Alumni Council for many years.

But it was decades of service to PC students that made Dean Nixon a beloved pillar of the campus community. Starting out as an assistant football and head track coach, he transitioned into college administration as admissions director before being named dean of students in 1977. Later, former president Dr. John Griffith elevated Dean Nixon to vice president of student affairs and dean of students.

When Dean Nixon retired in 2002, he was granted emeritus status and had two annual awards named in his honor – the S.C. College Personnel Association’s Joseph O. Nixon Award for Chief Student Affairs Professionals and PC’s Joseph O. Nixon Leadership Award, which was established by his wife, Mica ’79, and their children, Tracie Nixon Scarborough ’89 and Bryant Nixon. In 2009, the Nixons were recognized by the Alumni Association as the Thomas Aurelius Stallworth ’55 Alumni Award for embodying the best characteristics of Stallworth’s Christian leadership.

In 2019, Joe and Mica ’79 Nixon were inducted into the William Plumer Jacobs Society for their long-time philanthropic support of PC. Dean Nixon’s legacy continues to impact the lives of many PC alumni. His abiding, supportive presence at almost all PC football and basketball home games will be missed.

The College extends its most heartfelt sympathy to Mica, Tracie, Bryant, and his family and friends.