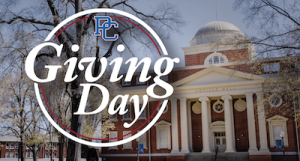 Presbyterian College’s fifth annual Giving Day proves that the past continues to inspire the present and future.The 24-hour fundraising campaign on May 26 commemorated the day in May 1874 when PC founder William Plumer Jacobs wrote about his dream to establish a college in Clinton.“I have at last set my heart on a plan, the complete fulfillment of which I desire to commemorate my 20th anniversary at Clinton,” he wrote. “It is nothing more nor less than the establishment of a college at Clinton. It will take a vast outlay of time and money, but it can be done, and, God willing, it shall be done.”This year, 855 donors gave a total of $316,323 to the college in just one day. Nearly 80 percent of those donors were alumni. While most gifts came from in-state, they also came from half the other states in the U.S. and two foreign countries.

The PC Fund benefitted most from Giving Day, with gifts totaling $112,471. More than $21,000 in donations also were spread to the college’s other annual funds – the Forever BLUE (Bridging Life’s Unexpected Emergencies) Fund, the GRACE (Giving Resources and Achieving Community Equity) Initiative Fund, the Occupational Therapy Annual Fund, the Physician Assistant Annual Fund, and the School of Pharmacy Annual Fund.

The Scotsman Cup Challenge also was held on Giving Day. Football had the most donors (48) who, in turn, raised the most money ($26,425). Baseball raised the second-highest amount at $26,425, while women’s soccer tallied the second-highest number of donors at 35. Softball had the highest percentage of donors in the challenge at 17.8 percent, followed by women’s soccer (12 percent) and women’s basketball (8.7 percent).

“I thank everyone who gave their treasure to sustain and grow PC,” she said. “Once again, we joined together as a college family to honor our past while securing a bright future for the next generation of Blue Hose.”