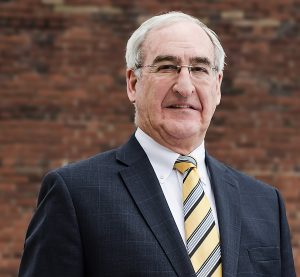 Larry Flynn, an attorney with Pope Flynn, a Columbia-based law firm concentrating in public finance and governmental law, has been appointed to the board of the South Carolina Supreme Court Historical Society. The Society encourages the study, preservation, and promotion of the history of the state’s judiciary and Bar to the public. The board is led by former USC School of Law Dean Rob Wilcox.

“As the years have passed over my own 45 year career as a lawyer in South Carolina,” said Larry Flynn, “I’ve become more conscious of being a part of the rich and storied history of the practice of law in this state. The Society is working to preserve and showcase a heritage of landmark cases, courtroom battles, and jurists and lawyers. History has been made in the courtrooms and law practices of South Carolina, and I hope to be a small part of telling that story to others.”

Flynn, who works out of Pope Flynn’s downtown Spartanburg office, serves municipalities and special purpose districts, including water districts and electric cooperatives throughout the Upstate, and other governmental entities; his practice combines public sector law with a general civil practice. Flynn is a certified mediator and arbitrator, a Planning Commission Instructor, and received both his BS and JD degrees from the University of South Carolina. Flynn is also a member of the South Carolina Bar’s “Memory Hold the Door” committee, which “honors deceased lawyers and judges who provided distinguished service to the public and the Bar” in part through contributions to law school endowments, as well as an annual ceremony. He is a 30-year member of the Spartanburg Rotary Club and past chair of Spartanburg County School District Seven.

In 2015, Flynn received the Compleat Lawyer Award – Platinum, the University of South Carolina School of Law’s highest recognition for outstanding civic and professional accomplishments; the nominee must be a University of South Carolina School of Law graduate. The then members of the Compleat Lawyer awards selection committee were then Chief Justice Jean Toal, Chief Judge John Few, President of the South Carolina Bar Calhoun Watson, Co-Chair Law School Alumni Council James Bradley, and the Dean of the USC School of Law Robert Wilcox. Flynn’s video tribute at the reception and dinner for the award recipients may be found at youtu.be/9ynjMte_cGw.