Zoo Guests Encouraged to Visit this Weekend for Final Farewell

One of Riverbanks Zoo and Garden’s most popular pinnipeds will soon be headed west. Guests are encouraged to visit the Zoo this weekend to bid farewell to female California sea lion Annette.

Annette will be moving to Texas early next week to another facility accredited by the Association of Zoos and Aquariums (AZA). Riverbanks is among more than 230 AZA-accredited zoos and aquariums which provide the highest standards in animal care and welfare.

Annette has become a guest favorite at Riverbanks since her arrival in Columbia nearly six years ago. She came to Riverbanks from Squalus, Inc. in Myrtle Beach. For much of her time at Sea Lion Landing Annette was part of an all-male mix until the arrival of a female harbor seal in 2018. Annette has been a highlight of the Zoo’s daily sea lion demonstrations and Backstage tours. 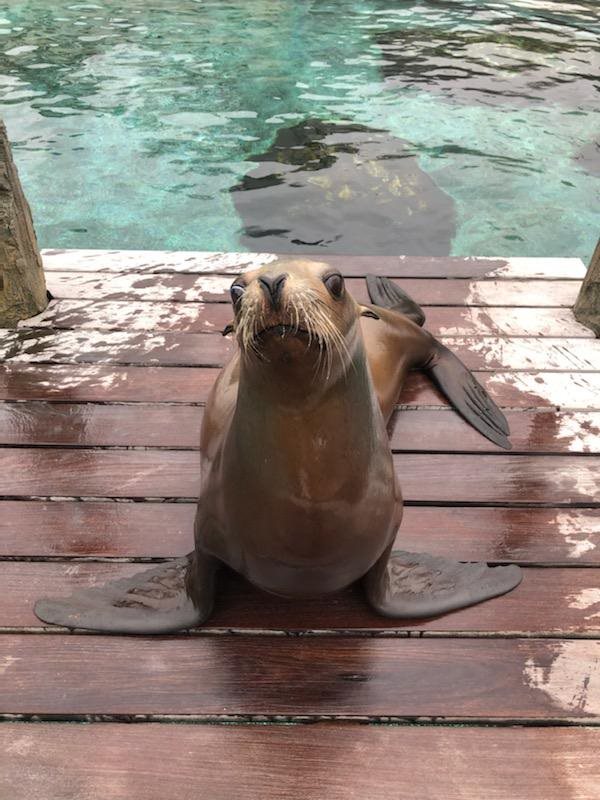 Annette’s upcoming move to Texas is a recommendation from the AZA California Sea Lion Species Survival Plan (SSP®). There she will be paired with a new male companion. For more than 40 years, SSP® programs have helped ensure the survival of threatened and endangered wildlife.

Annette’s arrival at Riverbanks came following an unfavorable journey in the wild. She was stranded, rehabilitated, and released on four separate occasions between December 2014 and June 2015. Finally, after being stranded a fifth time, Annette was deemed non-releasable by the National Oceanic and Atmospheric Administration (NOAA) and placed permanently in human care.

Additionally, Riverbanks is a proud advocate for the Marine Mammal Center in Sausalito, California, and the Center’s research to advance medical care in California sea lions and harbor seals. A grant provided by Riverbanks’ Satch Krantz Conservation Fund supports studies that test the effectiveness of antibiotics in treating the species.

About Riverbanks Zoo and Garden

Riverbanks Zoo and Garden is home to more than 2,000 magnificent and fascinating animals and one of America’s best public gardens. The Zoo opened on April 25, 1974, and for nearly 50 years, has connected individuals, families, and school children with the natural world. Riverbanks is an accredited member of the Association of Zoos and Aquariums and is recognized as a global leader in animal care and welfare, education, recreation, science, and wildlife conservation. It is the mission of the Zoo and Garden to create meaningful connections and inspire actions that will have a lasting impact on conservation. For more information, visit www.riverbanks.org.