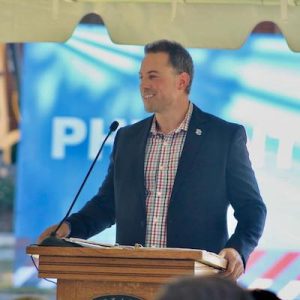 Presbyterian College will reveal its new modern market position and dynamic strategic blueprint at the “Advancing the Championship Spirit: A Bold, New Future” event at 10:30 a.m. Friday, Oct. 21, in the campus’s Belk Auditorium.

President vandenBerg will also reveal a series of 20 breakthrough initiatives supported by significant financial gifts that will be implemented to establish Presbyterian College as a preeminent institution of higher education in South Carolina and across the nation and world.

Since joining PC in February 2021, vandenBerg has not been shy about embracing PC’s historic origins while casting a bold vision for the college’s future. PC’s overarching distinction strategy is to embrace audaciously – and aggressively pursue – its newly articulated market position, informed by its three conceptual pillars.

PC developed its strategy as a community during the 2021-2022 academic year through a series of iterative brainstorming sessions led by 3Enrollment Marketing and guided by a representative PC Core Team. Last summer, seven volunteer working groups were formed, led by a cabinet member, and comprised of trustees, faculty and staff, and students. Each working group produced two products, a white paper that made a case for new strategic initiatives and a corresponding process map outlining key actions, assignments, and timetables for completion.

Presbyterian College’s intentional move to establish a bold path to a sound future serves as an example for the higher education industry, given the challenges institutions face today:

Founded in 1880 by Dr. William Plumer Jacobs, Presbyterian College has offered challenging academics and a culture of honor, ethics, and service that prepares students to be community leaders. PC offers its students the benefit of engaging with exceptional faculty who take an individual interest in their students’ well-being, both personally and in the classroom.