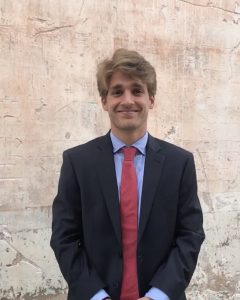 “When I first got to PC, I didn’t want to go to graduate school,” said Ricardo Hernandez, a recent PC graduate from Madrid, Spain.

“I certainly didn’t want to stay in school long enough to earn a Ph.D.”

“I like the idea of finding out why things are the way they are,” he said.

Hernandez talked to chemistry professor Dr. Evelyn Swain during his freshman year. He decided then to declare a major in biochemistry.

“I could study why things are the way they are in the human body,” he said.

The desire to know more

Still, Hernandez originally planned to earn a degree from PC and then look for a career.

“I thought I would be done with studying, homework, and classes after four years,” he said. “But as I was going through the years in PC, my desire to know more kept increasing.”

Hernandez saw that he became even more curious about learning during Organic Chemistry in his sophomore year.

“You had more freedom in the lab and were able to do more than what you were required to do,” he said.

Hernandez was an active member of PC’s chapters of the American Chemistry Society and the American Society of Biochemistry and Molecular Biology in addition to serving as captain of the Blue Hose soccer team.

Hernandez could have been satisfied with all that he’d accomplished with biochemistry and soccer. But then a new science major at PC caught his attention: computational biology.

“In computational biology, you apply computational tools such as coding, data analytics, even some programming, to study biology,” Hernandez said. “The possibilities of what you can achieve mixing both are endless.”

“Dr. Gordon helped me see that knowing computational tools is the future of research,” Hernandez said. “The major would make me stand out from most scientists who do not have hands-on research experience and computational knowledge.”

Hernandez has already seen how beneficial the major is. He’s become proficient at using computational tools while conducting research. Hernandez combined his two majors in his honors research, “The Study of Sphingolipids Metabolism and Its Effect on Neurological Disorders.”

Hernandez also used what he’s learned from both majors when he interned at a chemical company before his junior year. The internship is the time Hernandez decided to pursue a Ph.D.

“I realized if I wanted to, at some point, lead my own team, I needed higher education,” he said. “I want to be the best scientist I can be. To do that, I need to lay a good foundation, and that’s why a Ph.D is the best option for me.”

Hernandez has been accepted into the Ph.D. program at the University of South Carolina. He’ll begin class this fall.