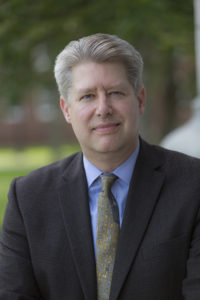 In recognition of Constitution Day, Furman University’s Riley Institute and Department of Politics and International Affairs will present “Slipping Toward Monarchy?: The Rising Power of the Presidency” in Hartness Pavilion on Wednesday, Sept. 18 at 4 p.m. The event is free and open to the public; registration is not required.

Andrew Rudalevige, Ph.D., a professor of government at Bowdoin College specializing in the modern presidency and interbranch relations, is the featured speaker. Rudalevige writes frequently on executive power, the administrative presidency, and national politics, including as a masthead contributor to the Washington Post’s “The Monkey Cage” blog. He is the creator of “Founding Principles,” a series of videos on American government and civics available as a PBS LearningMedia resource.

“We hear a lot about the expanding powers of the presidency and what this means for the future of democracy. It is important to all of us to know how well our system of checks and balances is working and has worked over the last several decades,” said Jill Fuson, director of The Riley Institute’s Center for Critical Issues.

Joining Rudalevige in a conversation about checks and balances will be Danielle Vinson, Ph.D., and James Guth, Ph.D., Furman professors of politics and international affairs.

“This conversation will be a good opportunity to think about how the framework the Founding Fathers put in place more than 200 years ago continues to evolve and influence politics today,” said Vinson.

For more information about the event, visit riley.furman.edu.