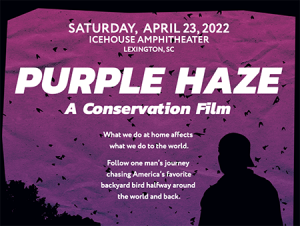 Zach Steinhauser will debut his long-awaited documentary on one of the many wonders of the Lake Murray and Lexington area, the purple martins! Purple Haze: A Conservation Film will be presented on Saturday, April 23rd at The Icehouse Amphitheater in Lexington.

Snacks and beverages from Tin Can Kettle Corn and Old Mill Brew Pub will be sold at the film’s unveiling beginning at 7:00 pm. The film will begin at 8:00 pm and end at 9:20 pm. Admission is $10.00 per person at: https://www.purplehazeacfmovie.com/.

This unique phenomenon that happens annually around Bomb Island on Lake Murray has drawn scientists and bird enthusiasts since its discovery in 1988. One of them, Zach Steinhauser, a Lexington local, spent five years researching and following the purple martins to put together the documentary about the local sensation. Zach is a United States Coast Guard licensed Captain who has been all over the United States and Brazil to study this songbird. He hopes that his film, Purple Haze: A Conservation Film, will educate and inspire others to take steps and help preserve these gentle, beautiful songbirds for generations to come.

Other organizations attending will be the Purple Martin Conservation Association, Audubon SC and the Congaree Riverkeeper. You will also find out how to build or create your own “backyard purple martin colony” at the film’s debut. These unique homes to purple martins will keep this beloved local attraction returning to Lake Murray in the Summers.