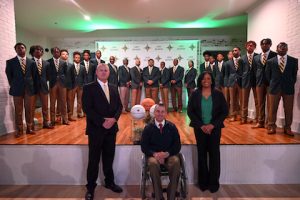 The Laurens District 55 High School (LDHS) Raiders boys’ basketball team is learning not just about basketball, but also pride in having good character. Armond Flood, the team’s new head coach, knows that basketball is a vehicle for teaching discipline and leadership. A new initiative led by Flood is the Raiders Annual Tip-Off Fundraiser Banquet and Blazer Ceremony. The inaugural event was held on November 27, 2022, at The Ballroom Wedding and Events Venue in Laurens. Coach Flood welcomed guests and shared his journey to becoming the new coach of the Raiders boys’ basketball team. He also shared his purpose as a coach, “Behind every fearless player is a fearless coach who refuses to let them be anything but the best they can be.”

Marcus Barnes, an athlete in his senior year at LDHS, said, “I have learned from Coach Flood and being part of this great program that we must be patient and trust the process in everything we do.”

The special guest speaker for the event was DeVon Smith, a motivational speaker, author, and advocate for young athletes. Smith encouraged the audience to unlock their wildest dreams and be crazy enough to believe they can happen.

Laurens District 55 High School Principal Lewis Compton said, “The blazer ceremony and basketball banquet dinner was a great opportunity to create a positive experience for our players, coaches, and school. The support that our community has for boys’ basketball is tremendous!”

“This event gives the younger athletes something to look forward to and something to motivate them,” said Flood. He calls on the community to join the yearly fundraising dinner banquet to help support the needs of the Raiders basketball program. Fundraising helps provide for student-athletes to travel to camps, play in tournaments, and continue to build the program.

The evening’s event included a blazer ceremony. According to Flood, the blazer represents having high standards in athletics, attendance, and grades. Raiders embody high standards and have pushed themselves to be diligent with school attendance and school work. Seven athletes of the Raiders boys’ basketball team are in their senior year of high school, and they are all making As and Bs. Raiders are to wear their green blazers on Friday of home games, on their visits to other schools when they read to elementary students, and when they join the middle school pep rallies.

The custom-fit green blazers were donated by Fred Dean, owner of JusDean Dress for Success. The pants and shirts were provided by Larry Kerns, the owner of Sock Ministry, a clothing store in Fountain Inn.

Outside of school and athletic events, Flood will lead the team in becoming more involved in the community. They can be expected to don their green blazers as they participate in community events and outreach programs. Flood envisions the Raiders growing as strong male figures who are actively involved in their community. He hopes the Laurens community will be proud of the Raiders boys’ basketball team both on and off the court.

Superintendent Dr. Ameca C. Thomas said, “This was an amazing first-class event that demonstrated the high expectations we have for student-athletes and all students. It is important for them to be great people in the classroom, in the community, and on the court. I am truly grateful to Coach Flood and the other coaching staff for their dedication and service. I am also beyond grateful for the support from the community.”