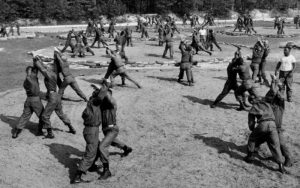 One of the things America has done particularly well through its history is turn civilians into soldiers. In World War II, for instance, the U.S. Army went from fewer than 188,000 active-duty members to 8.3 million soldiers who swept victoriously across battlefields around the globe.

Vietnam would be a different sort of war, and modes of training changed to match it – successfully, by most measures on the tactical level.

And much of that training took place right here at Fort Jackson.

Henry Howe, the director of the Army Basic Combat Training Museum at the fort, will speak in some detail about that training in a lecture on Friday, Oct, 7, at noon at the South Carolina Confederate Relic Room and Military Museum. The program, the first of a new season of the museum’s monthly Lunch and Learn lectures, will be open to the public, and free. (This program was originally scheduled for Sept. 30, but delayed by Hurricane Ian.)

First, Howe will give the background – which is too often forgotten in discussions of those tumultuous times.

He will start with the 1940s, with the Indochina War, and of course with the way the Soviet Union gobbled up all of Eastern Europe after the fall of Germany – and how that and other global developments led to the U.S. Cold War strategy of containment. “America really was afraid of world domination by the communists,” Howe says. “The Domino effect isn’t just something we made up.”

Then, after touching upon such topics as the rise of communism, the role of Ho Chi Minh, the Gulf of Tonkin Resolution, escalation, and South Vietnam, including “problems and concerns about its government and its military,” the speaker will move on to the main point of his lecture – the training of soldiers during the war.

This war would be fought in steamy tropical jungles, and involve engaging the enemy at far less distance than the hundreds of meters anticipated in previous forms of training. That called for changes in the approach to marksmanship, such as the “TrainFire” method, which involved shooting at targets that popped up at arbitrary distances, rather than at the traditional stationary bull’s-eyes. Recruits learned to acquire such targets immediately, determine whether they were hostile, and shoot to kill if they were.

They also learned to make their way through realistic environments, such as Bau Bang, the mock Vietnamese village erected at Fort Jackson. After that, they might move on to more in-depth such training at Fort Polk in Louisiana. Then, on to Vietnam.

This lecture is one of several that have been presented in anticipation of the grand opening of the museum’s new exhibit, “A War with No Front Lines: South Carolina and the Vietnam War, 1965-1973,” in early November.