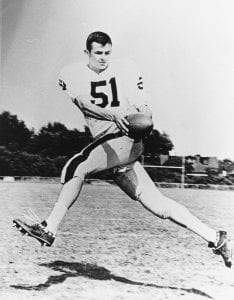 Jerome J. Richardson,  founding owner of The Carolina Panthers and long-time business leader in the Carolinas, has given $150 million to Wofford College, his alma mater. The gift — the largest in the college’s history — is designated for the endowment with a focus on need-based scholarships and experiences for Wofford students.

With this gift, Richardson’s contributions to Wofford exceed $262.6 million, among the largest individual commitments ever to a U.S. college or university. The $257.3 million he has given since 2014 as part of the current “For Wofford“ campaign is the largest single campaign gift made to a national liberal arts college.

“Mr. Richardson’s loyalty to Wofford College and his commitment to the student experience have been a constant since he came to Spartanburg from Fayetteville, N.C., on a modest football scholarship in 1954,” said Wofford President Nayef Samhat. “After he graduated, he gave even when he had very little to give, and throughout his life’s journey, he has remembered his alma mater without fail. This gift is Mr. Richardson once again changing the game for Wofford College students, and we are forever grateful for his love of our college and the countless ways this gift will impact our students, our community and ultimately our world.”

The $150 million endowment gift will focus on four areas:

The college will award the earnings from these funds so that the impact of this gift continues in perpetuity.

“These endowed funds will play a crucial role in making a Wofford education affordable and accessible for generations of students while helping the college to extend its support and appreciation for staff members who contribute to the Wofford experience,” said Samhat. “Every member of our community will benefit in some way from this gift!

“Wofford College has a reputation for supporting student success. Since the college was founded in 1854, faculty and staff have used the resources available to them to mentor, advise and inspire students such as Jerry Richardson. Now, because of Mr. Richardson, the full Wofford College experience will be available to even more students, especially those impeded by financial barriers.”

Richardson many times has credited his Wofford College career with helping him succeed in business and in the NFL.

“Coming to Wofford in 1954 as a 18-year-old with a partial scholarship was a turning point in my life,” Richardson said. “It is difficult to put into words how grateful I am for that opportunity and how proud I am of the tremendous progress the college has made since then. My hope is that many more young people will now be able to aim high regardless of their background or financial means.”

Jerry and Rosalind Sallenger Richardson have contributed to 14 capital projects on Wofford’s campus since 1979, including three major buildings during the current comprehensive campaign, which launched publicly in October 2018: the 3,400-seat Jerry Richardson Indoor Stadium, the Rosalind Sallenger Richardson Center for the Arts and Jerome Johnson Richardson Hall, a 150-bed residence hall that opened in the fall of 2020. Their other philanthropic focus at Wofford has been the Richardson Family Scholarship, which provides a full four-year scholarship to one student in each class. The scholarship includes books, a laptop, paid internships and a month-long study abroad experience.

Richardson has a photo in his Charlotte, North Carolina, office of his childhood home. There was no running water nor electricity. His father was a barber; his mother worked in a women’s clothing store. They didn’t have a car until Richardson was 16 years old. When Richardson enrolled at Wofford, he depended on his football scholarship and on a $30 a month job as a resident assistant. His childhood experiences have stayed with him always and have shaped his philanthropy with an emphasis on providing opportunities through education.

Richardson was named an Associated Press Little America selection in 1957 and 1958 and still holds three records as a wide receiver for the Terrier football team. He still calls being elected team captain in 1958 as one of his greatest lifetime honors. In 1983, he was chosen to Wofford’s All-Time Football team as a receiver. The college retired his jersey #51 in 2011.

As a student, Richardson was a member of Kappa Alpha Order, president of the Inter-Fraternity Council and a member of Blue Key National Honor Fraternity and Scabbard and Blade military fraternity. He was drafted in the 13th round by the NFL Baltimore Colts after his junior year, but he was determined to finish his degree and complete his college football career with the Terriers. After graduation, Richardson played two seasons in the NFL, earning Colt Rookie of the Year honors in 1959 and catching a touchdown pass in the 1959 Championship game from Johnny Unitas.

Richardson then embarked on a successful business career with his Wofford teammate, Charlie Bradshaw. Opening the first Hardee’s franchise in Spartanburg, he and Bradshaw co-founded Spartan Food Systems.  Richardson later was the CEO of Flagstar, which was the sixth largest food service company in the nation.

On October 26, 1993, Richardson became the first former NFL player since George Halas to become an owner when the Carolinas were unanimously awarded the NFL’s 29th franchise. The Carolina Panthers began play in 1995 and reached the NFC Championship game in the 1996 season. The Panthers won the NFC Championship in 2003 and 2015, advancing to Super Bowls XXVIII and 50.

Richardson is  the only person to be inducted into both the North Carolina and South Carolina Business and Athletic Halls of Fame.

Wofford College, established in 1854, is a four-year, residential liberal arts college located in Spartanburg, South Carolina. It offers 27 major fields of study to a student body of 1,775 undergraduates. Nationally known for the strength of its academic program, outstanding faculty, study abroad participation and successful graduates, Wofford is recognized consistently as a “best value” and for its commitment to student success and accessibility for low- and middle-income students. The college community has 12 sororities and fraternities as well as 19 NCAA Division I athletics teams.