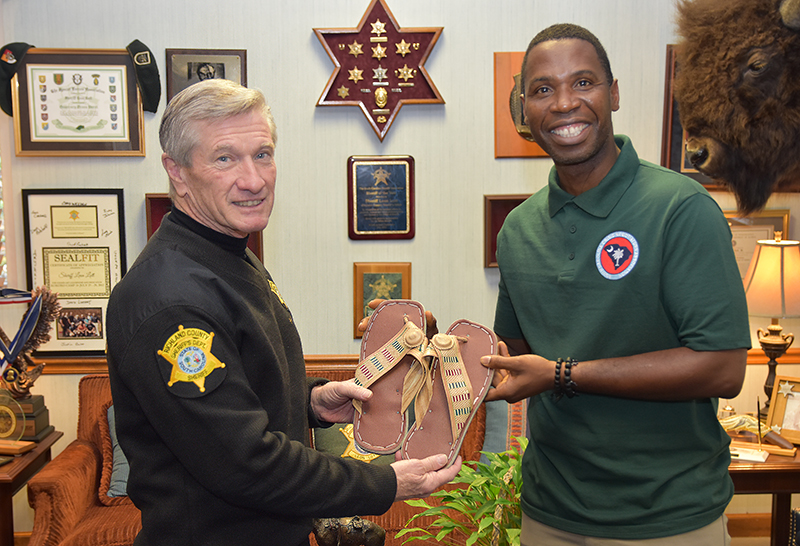 When Richland County Sheriff’s Department (RCSD) Senior Deputy Thomas Browne recently returned from one of his many visits to his native West Africa, he brought with him GIFTS FIT FOR A CHIEF: shoes in fact, but specially designed handmade house slippers that are only worn by African leaders and heads of households.

“These are traditional African slippers that anyone can wear, but they are particularly designed for men of the house and those of a particular lofty status or position,” said Browne, who brought shoes for both Sheriff Leon Lott and RCSD Lt. Col. Kelvin Ashe. “I remember when I was growing up, these were shoes that only a father could wear. They were and are worn during special lifetime events like marriages, birthdays, even funerals; with different designs designating a chief or a member of royalty.”

Browne, who departed for the Ivory Coast in Dec. 2021 and returned late last month, was born in Monrovia, the capital of Liberia in 1983. His father, Col. Hezekiah Browne, who was then the operations commander of President Samuel Kanyon Doe’s secret service (presidential security force), was killed during that country’s bloody civil war which also resulted in Pres. Doe’s capture, torture and execution by rebels in 1990. Young Thomas was then only six-years-old.

The Browne family was able to flee Liberia to the Ivory Coast, ultimately settling in Ghana before immigrating to the U.S. in 2000.

In 2010, Browne earned a BA degree in criminal justice from East Tennessee State University. He joined the U.S. Army Reserve in 2013, earned his American citizenship, achieved the rank of staff sergeant, and has one overseas deployment to Iraq under his belt.

Browne is also a member of the Richland County Sheriff’s Department, having joined the department five years ago, and today serving on the Community Action (CAT) Team. On the CAT team, Browne is assigned to RCSD’s Region 1, and he is a liaison between the department and the various African communities living and working in the Midlands. In addition to English, Browne is fluent in both French and the Ashante or Twi language, which aid in his outreach to the African-born citizens of the county, now numbering in the thousands, he says.

Why Browne’s recent return to West Africa? “The need and the plight of my people after so many years of civil war,” he says.

Browne is today – and going forward – serving that need through his non-profit organization, the Hezekiah Browne Foundation Liberia, so-named in honor of his late father.

Brown traveled to the Ivory Coast on Dec. 28, to direct the delivery of three large barrels of primarily clothing items: including men’s and women’s clothes, shoes, toiletries, toys for children, and first aid kits.

“The items were donated by Sheriff Lott, the RCSD Community Action Team, Good Shepherd Faith Assembly Church, and the Jesus Christ Church, all from Columbia,” said Browne, who was unable to cross the border from the Ivory Coast into Liberia for logistical reasons related to his current service in the U.S. Army.

“These slippers and the tradition associated with them are extremely significant to me and much appreciated,” said Lott. “Perhaps even more so – and what makes this gift even more personally special – is the man and deputy who presented them to me. His story of overcoming seemingly insurmountable odds, of achieving great things, and then giving back to those in need is one which speaks to the very culture and tradition of our department and who we are.”

Though Sheriff Lott and Lt. Col. Ashe were the only recipients of the chief’s slippers [see picture of Lott and Browne], Browne’s fellow members of the CAT team also received special African gifts.