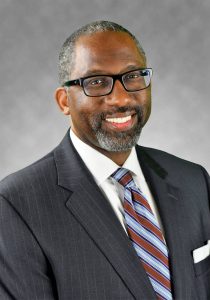 Richland One Superintendent Dr. Craig Witherspoon has been named the South Carolina Athletic Administrators Association (SCAAA) 3A/2A/1A Superintendent of the Year for 2022. The award is presented annually to the superintendent who has shown outstanding leadership and support of athletics on the local and state levels.

Dr. Witherspoon is receiving the honor for his dedication to students and his commitment toward improving the quality of interscholastic athletics and facilities in Richland One, according to Roger Dixon and Jack Kosmicki, co-chairs of the SCAAA Awards Committee. He will be presented the award on March 16 in Charleston.

“I am honored to have been chosen by SCAAA for this award, especially because it also recognizes what we do as a team in Richland One for the benefit of our students,” said Dr. Witherspoon. “Athletics play a vital role in the development of the whole student – academically, socially and personally – and we fully embrace that belief.”

Richland One has a tradition of excellence in athletics as well as in academics. Last year alone, student-athletes won 26 team and individual state championships in eight sports. Student-athletes are also expected to excel in the classroom. Richland One has a “C” average policy, requiring students in grades 6-12 to have at least a 2.0 GPA in all courses in which they were enrolled the preceding semester as a condition for participation in competitive co-curricular activities.

“He has been very supportive of athletics in Richland One, just as he has with curriculum and instruction. He sees it as an integral part of the student’s educational experience,” said Matz. “He’s allowed me to do my job and has wholeheartedly championed what we do.”

The SCAAA was established in 1987 with the purpose of providing information and professional development courses to its membership. The awards program was added some time later. Nominations are typically submitted to the Awards Committee by athletic directors, resulting in the selection of two award recipients – a 5A/4A and a 3A/2A/1A Superintendent of the Year.