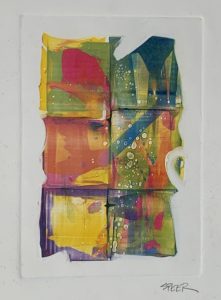 On Friday, Nov. 4, from 6 to 9 p.m., as part of West Columbia’s Fall Back Fest, Rob Shaw Framing and Gallery, 324 State Street in West Columbia, will host a reception to launch a month-long exhibit of works by artist Gene Speer.

In the late 1960s and early 1970s, Speer was influenced by teachers who valued conceptual and abstract expression, formalism, and minimalism. Artists who use color as a major component of form—including Hans Hoffmann, Sam Francis, Helen Frankenthaler, and Richard Diebenkorn—continue to influence his work today.

Speer’s interest in printmaking began when he was introduced to the medium of monotype printing as an alternative to painting. In combination with other printmaking media, he expands the monotype into multiple editions. Because only one vivid impression may be pulled from a plate before the ink is depleted, his monotypes are inherently unique.

Even ghost impressions—also known as second or cognate impressions—are much lighter and thinner suggestions of the first. He often further enhances impressions by applying additional printmaking media, such as lithography, Xerox transfers, or intaglio.

Since the mid-1990s, Speer has exhibited his work in galleries and museums across North and South Carolina, and his work appears in private collections across the United States.

Rob Shaw Framing and Gallery is a full-service frame shop and fine art gallery. Since opening his gallery in April of 2019, Shaw has hosted monthly exhibits to showcase South Carolina’s many talented artists.