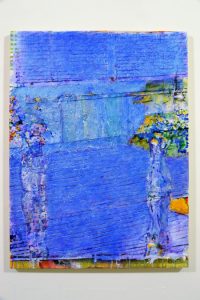 On Friday, Dec. 2, from 6 to 9 p.m., Rob Shaw Framing and Gallery at 324 State Street in West Columbia will host a reception to launch a month-long exhibit of works by internationally renowned artist Philip Mullen.

Since 1969, when Mullen began his career teaching at the University of South Carolina, his works have appeared in numerous exhibitions at galleries and museums across the US, including the David Findlay Galleries on Madison Avenue in New York City, the Dubins Gallery in Los Angeles, the San Francisco Museum of Art, the Malton Gallery in Cincinnati, and the Eva Cohon Gallery in Chicago and Highland Park, IL.

Mullen is known for large acrylic paintings, some as wide as fifteen feet. His 1983 8.5-by-12-foot painting Women in the Country (Series 2, No. 5) is part of the James C. Moore, Jr., Collection of the Work of Philip Mullen, which includes most of the 161 Mullen works owned by the University of South Carolina.

The 2020 recipient of the Elizabeth O’Neil Verner lifetime achievement award, Mullen was named a distinguished professor emeritus at the University of South Carolina in 2000. Since 1990, twenty of his paintings have been on permanent display at the Koger Center in Columbia.

Artist Don Zurlo describes Mullen’s paintings as “very physical, even sensual in the use of color and texture” to draw viewers “into the mystical elements of the works.” By manipulating tactile surfaces and simple forms on a flat plane, he depicts “infinite layers of human experience in a complex interaction between the physical and spiritual worlds.”

The opening reception honoring Mullen on Dec. 2 is part of a series of first-Friday events sponsored by Rob Shaw Framing and Gallery. Since opening his gallery in April of 2019, Shaw has hosted monthly exhibits to showcase South Carolina’s many talented artists.